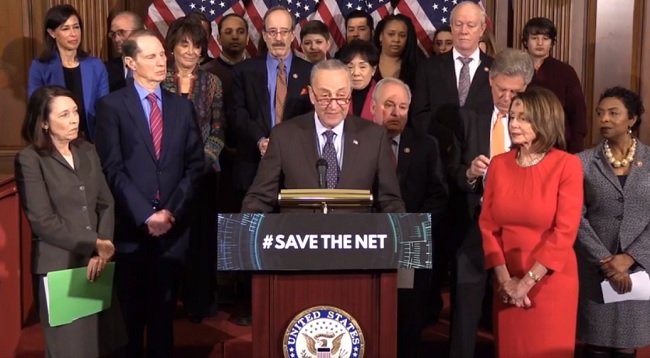 US politicians put net neutrality protections back on the agenda, introducing a new bill which would codify open internet protections scrapped by the Federal Communications Commission (FCC) in 2017.

Like previous efforts, the measure aims to nullify the FCC’s repeal order and restore rules which prohibited ISPs from blocking or throttling traffic and offering priority access to companies that paid for it.

A similar measure backed by Democrats cleared the Senate in 2018, but stalled in the Republican-controlled House of Representatives and expired with the close of the last session of Congress at the start of January 2019.

Though the Senate remains under Republican control, Senate Minority Leader Chuck Schumer (pictured, centre) expressed optimism the current bill might have a better chance of success now that Democrats control the House. Even if it does pass muster in Congress, however, it will still need President Trump’s signature to become law.

Dampener
Social media giant Twitter came out in support of the measure.

But Doug Brake, director of broadband and spectrum policy at the Information Technology and Innovation Foundation, said it contains a “fatal flaw”: a return to Title II classification, which treats ISPs as utilities and subjects them to tougher regulation than other internet companies.

“Title II is a non-starter. This legacy law simply doesn’t offer the balance a complex new platform like the internet deserves. It would be far better for Congress to thoughtfully design a new section of the law tailor-made for the competitive dynamics of today’s broadband market.”