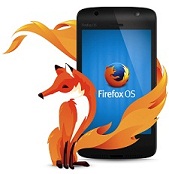 Mozilla is refocusing its Firefox OS efforts, acknowledging that it has “not seen sufficient traction for a $25 phone”, and that instead it will “focus on efforts that provide a better user experience, rather than focusing on cost alone”.

Its new strategy was announced in a memo from chief executive Chris Beard, which was subsequently published by CNET.

Beard said that in its early work, Mozilla has “moved mountains to create interest in the commercial ecosystem” surrounding Firefox OS, including partnerships with Qualcomm and Telefonica, “and more”. It has also “proven that the core of web technology can be a strong, viable platform for mobile”.

From here on, the intention is to “build phones and connected devices that people want to buy because of the experience, not simply the price”.

But Mozilla will now face the same challenges it already was, only more so – primarily competition from Google’s much more mature Android operating system.

While Firefox OS’ position at the entry level and in emerging markets at least saw it able to undercut Android devices from a plethora of vendors, further up the chain it will find itself competing with the more rounded device, apps and content proposition of the Google platform.

In order to address this, Mozilla will “explore implementing Android app compatibility, within a framework that keeps our long-term focus on the Web as the platform across desktop, mobile and connected devices”.

While this may enable it to narrow the “app gap between user expectations and the readiness of the ecosystem”, it is not a new path, and does not guarantee a level playing field between Android and the competition. Mozilla will not be able to offer access to the Play store or use the APIs which link to Google’s services, meaning there is still some effort to be made by developers in bringing an Android app to Firefox OS.

BlackBerry, Amazon (Fire) and Jolla are also following similar paths with regard to Android app support, while Cyanogen is also picking up a lot of support in its efforts to create a version of the OS which reduces the influence of Google.

Mozilla said it “will continue to invest in Web platform capabilities and programmes to incentivise developers to build for the Web”.

Lofty ambitions
Indeed, Mozilla’s goals are lofty. “Empowering people with technology, know-how and opportunity is key to our success, and we must provide product experiences that invite users into our community from enabling people to hack and customise their phone experience to providing local engagement for support, education and more,” the memo said.

Driving Firefox OS forward will be an initiative called Ignite, which will “focus on building a unified product experience and developer platform that exemplifies our values and the best of the Web”. This includes adoption of a revamped security model to expose more mobile Web APIs to developers and enable an extension mechanism to add to the UI and phone capabilities.

It will also provide direct distribution of Ignite builds to early adopters with existing unlocked Android devices, “as part of our new development model to build community and influence”.

And dedicated product development and release teams will be created to build products built on Ignite to address specific market opportunities – such as entry-level smartphones and smart TVs — which are then distributed through partners.

With regard to its existing efforts, Beard said that Mozilla will ship version 2.2 of the platform and complete “all pending work to deliver entry-level smartphones with our key partners”. This incarnation of the platform “will be maintained as a long-lived branch with security and stability updates only”.

The company will also “dive deep into fully exploring the feature phone opportunity identified earlier this year”, and “continue to explore IoT and connected device opportunities”.

In order to support this, it will “invest the necessary financial resources required to accomplish this new focused plan while ensuring we have a clear line of sight to return on that investment, especially in terms of the Mozilla mission impact”.