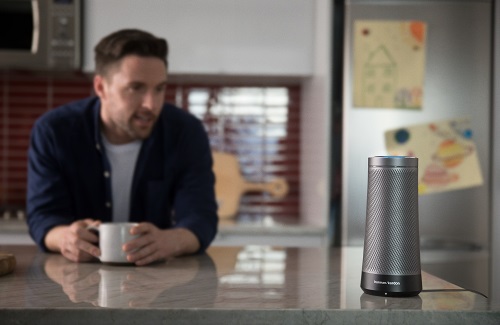 Microsoft is set to do battle with Amazon’s Echo and Google Home, as it took the wraps off a new Cortana-powered smart speaker developed in conjunction with Samsung subsidiary Harman Kardon.

Dubbed the Invoke, the device will be released in the US later in 2017. It will be controlled by Microsoft’s digital assistant Cortana, and allow users to perform tasks including playing music, managing calendars and accessing news, similar to the functions possible on Amazon and Google’s devices.

The Invoke will also have Skype integration, allowing people to make phone calls to other Skype-enabled devices.

Amazon currently dominates the voice controlled speaker market in the US, with the company’s Echo and Dot devices set to claim a 70.6 per cent market share in 2017, according to data from research company eMarketer.

Google Home lags behind, with a 23.8 per cent market share.

However, competition is only set to increase. Apple is rumoured to be developing its own smart speaker, while Samsung unveiled its digital assistant Bixby on the Galaxy S8 smartphone in March.

Marcus Ash, partner group program manager at Cortana, said the digital assistant would become “more productive” by being available on a smart speaker.

“With natural language recognition and deep integration with Microsoft’s suite of knowledge and productivity tools, Cortana is the most productive digital assistant and already used by more than 145 million people on PC and mobile devices. With Invoke, Cortana now becomes available in the home, making her even more valuable.”

Notably, Microsoft opted to partner with a company rather than introduce an own-brand device like rivals Google and Amazon.

A Microsoft spokesperson refused to comment on whether the company plans to introduce a branded smart speaker, The Wall Street Journal reported.