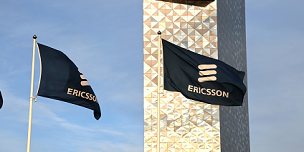 Ericsson secured an extension to a managed services deal with MBNL, a network sharing joint venture between operators 3 UK and EE, stretching the agreement by a further two years to May 2020.

The Sweden-based vendor provided managed services to MBNL since its formation in 2009, in addition to helping to consolidate the joint venture’s mobile sites.

A previous extension to the agreement in 2015 added three years to the deal (to June 2018) and the latest renewal will see Ericsson continue to be responsible for delivery of central operations, network performance and optimisation, field services and multi-vendor spare parts management.

MBNL said in a statement its decision to extend the contract was based on KPIs covering network performance and “the perception of Three and EE subscribers”, which were both key factors.

Securing the extension is no doubt a boost to Ericsson, given the company’s recent struggles. 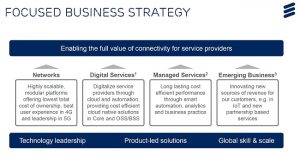 The vendor initiated a strategy to renew its focus on its traditional networks business in a bid to revive fortunes, following an ill-fated strategy to diversify its operations into a number of adjacent sectors. At its Capital Markets Day in November it highlighted managed services as one of four major areas of focus (see image, left, click to enlarge).

And in October, during its Q3 results, CEO Borje Ekholm noted that work to “review underperforming [managed services] contracts continues.” He added: “To date we have either exited, renegotiated, or transformed 13 out of the 42 contracts, resulting in an annualised profit improvement of SEK0.4 billion.”

Pat Coxen, managing director of MBNL, said it was the right time to extend its business relationship with Ericsson given a joint effort to achieve “record high levels of network performance to satisfy our shareholders”.