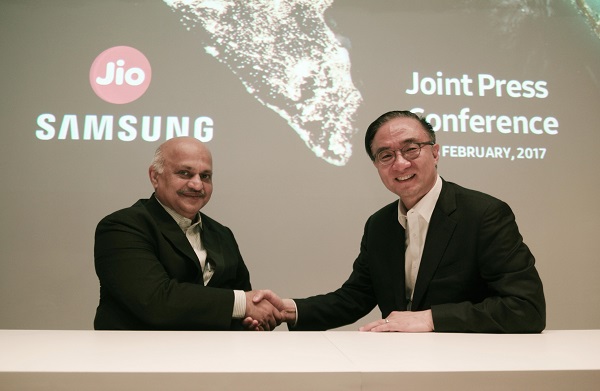 Indian 4G upstart Reliance Jio and South Korea’s Samsung announced an extension to their partnership, with plans to enhance the operator’s LTE network in rural areas and take coverage to 90 per cent of the population by the end of the year.

Jio president Jyotindra Thacker (pictured, left) said India is now the largest data market in the world, and its daily data volumes are 50 per cent higher than in China. India was ranked 150th worldwide in data volumes before Jio entered the market.

“We’ve taken the country from data shortage to data abundance,” he said, adding it aims to be the fifth largest operator in the world.

Tareq Amin, Jio SVP, said it is working closely with Samsung to continue to build out its network and now is focusing on what he calls infill coverage, such as in-building coverage and black spots in rural and urban areas.

While not disclosing the number of new base stations it plans to add in 2017, its network has in excess of 140,000 towers nationwide. He said improving coverage is not just a matter of adding more sites. “We’ll improve efficiency in the RAN as well as the core.”

The operator claimed to have more than twice as many 4G sites as all its competitors combined.

Its network carries two billion voice and video minutes per day and adds seven new customers per second, which he said requires a quality and scalable network to keep up with this demand.