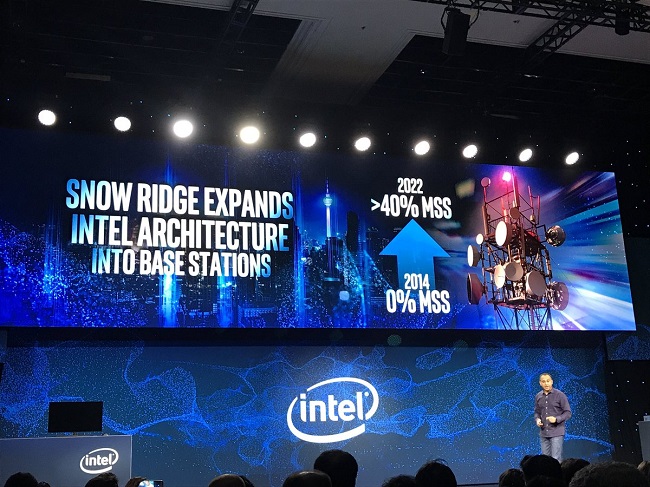 LIVE FROM CES 2019, LAS VEGAS: Intel set its sights on gains in the 5G infrastructure market, announcing a new system on chip (SoC) designed specifically for next generation mobile base stations.

During a briefing with journalists, Navin Shenoy, EVP of Intel’s Data Center Group (pictured), said: “Computing is really what 5G is all about. There are new use cases 5G will enable that require computing to move closer to the edge, and no one is suited better than Intel to address these opportunities.”

The new chip, codenamed Snow Ridge, will be manufactured using Intel’s 10nm process. An early iteration of the silicon demonstrated at the briefing revealed it will offer 100Gb/s data rates and be able to serve multiple applications simultaneously, with the ability to prioritise data traffic for latency-sensitive applications.

Shenoy explained the move essentially repurposes Intel’s existing data centre technology, albeit in a smaller and more rugged form factor, to “move the servers closer and closer to the user”.

With the new chip, Intel said it’s aiming to grow its market share in wireless base stations to more than 40 per cent by 2022, up from zero in 2014.

Snow Ridge is expected to become available in the second half of 2019. However, the chip was just one of many announced by Intel.

Among other things, the company also previewed its new Lakeview CPU architecture; teased the release of its ninth generation core processors for mobile PCs in Q2; and unveiled a new artificial intelligence chip designed to tackle inference workloads including image recognition and classification.

Intel noted Facebook is an early development partner on the latter.