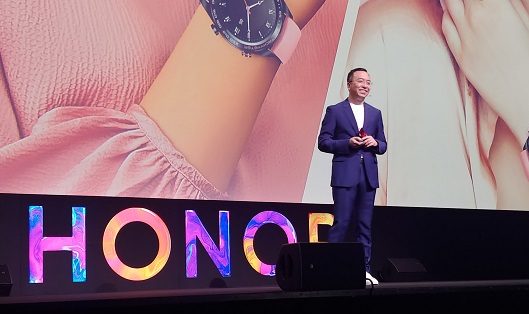 “As the first flagship in 2019, I want to set a new benchmark for the smartphone this year. I want to bring design and innovation not seen before,” Honor president George Zhao (pictured), said at the event. 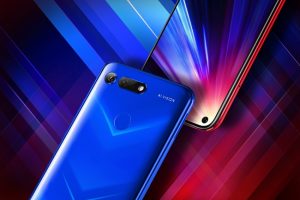 View20 launched into the Chinese market late in 2018, meaning the device is not completely unknown. But it does feature a number of selling points that make it stand out in the international market, and among flagship and competitive mid-tier devices.

Honor believes the 48MP rear camera, powered by Sony IMX586 silicon, is the key differentiator. It is said to enable high-definition imaging even when using digital zoom. The company also highlighted the role of the Huawei-made Kirin 980 chip in powering features including artificial intelligence (AI) Ultra Clarity, which combines images to deliver the highest-quality output, and AI Night Shot for improved low-light capture.

Another key feature in a world of notches, sliders, and disappearing bezels is the in-screen front camera. Honor View20 has a small 25MP lens in the upper left corner of the 6.4-inch screen (aperture size is 4.5mm), removing the need for a notch and enabling the device to boast a screen-to-body ratio of 91.82 per cent.

First, the “hole” for the camera does not fully penetrate the display, maintaining the structure and strength of the screen. To enable light to reach the camera, the company adopted a technique called pixel transition technology to control the flow of liquid crystals and also uses a proprietary bonding material.

Second, its 4.5mm aperture is smaller than that of the Infinity-O in Samsung’s A8s, which is also fully punched-through the screen.

While this gives Honor an edge now, it will be interesting to see if the approach is used by parent Huawei in its next flagship, which will go head-to-head with Samsung’s new devices (scheduled to be unveiled ahead of MWC Barcelona).

There are four colour variants: sapphire blue and midnight black in the 6GB/128GB configuration; and phantom blue and phantom red (8GB+256GB). The latter pair are priced €649.

Availability is from today (23 January), although there will be some variation by market. Also, not all versions will launch in all markets.

Other features of the device include its use of three Wi-Fi antennas, with the most appropriate selected based on the way in which the device is held to improve performance (although they cannot all be active at the same time).

Other products
During the event, Honor also showcased several wearables including Watch Magic and Watch Dream, which it said are “designed for all aspects of daily life”. The products, which are “coming soon”, are keenly priced, with Watch Magic set to cost €179.

Also on stage was the €69 Honor Band 4 fitness tracker and €99 FlyPods Lite earbuds.

Brand refresh
The event also saw the Honor brand getting an update. Its logo has shifted from lower case to upper with a new colour scheme: “Honor has grown, so it has become upper case”, Zhao said.

And the old For the Brave strapline is replaced by Honor My World.