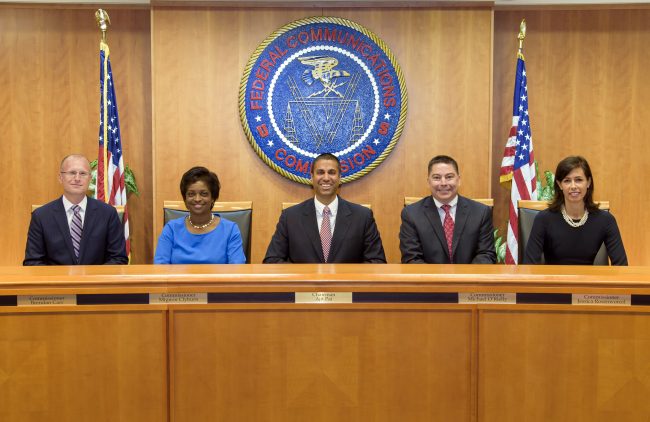 The US Federal Communications Commission (FCC) set the gears in motion to hold a mmWave spectrum auction in November after the US president approved a fix to a technical obstacle holding the sale back.

In a blog post, FCC chairman Ajit Pai (pictured, centre) said the commission will vote in April on a public notice seeking input on procedures for separate auctions for the 28GHz and 24GHz bands. The measure would also set an ambitious start date of 14 November for the 28GHz auction.

The push to hold the mmWave auction comes after President Donald Trump and Congress approved a fix for the way upfront auction payments are held as part of a sprawling budget deal.

Pai previously said the FCC could not hold any auctions until the issue was resolved.

Dissent
While the industry is eager to get its hands on 5G spectrum, not everyone will be happy the FCC is pressing ahead with individual auctions of mmWave bands.

The Competitive Carriers Association (CCA), which represents the interests of smaller and rural US operators, and T-Mobile US (a CCA member), both previously issued separate calls for the commission to auction all the mmWave bands earmarked for 5G together.

CCA argued the 28GHz band is already largely controlled by Verizon and AT&T, discouraging smaller operators from bidding when they know they will likely be beaten by the two titans.

T-Mobile said auctioning all the bands together would yield a “more robust and competitive auction”.