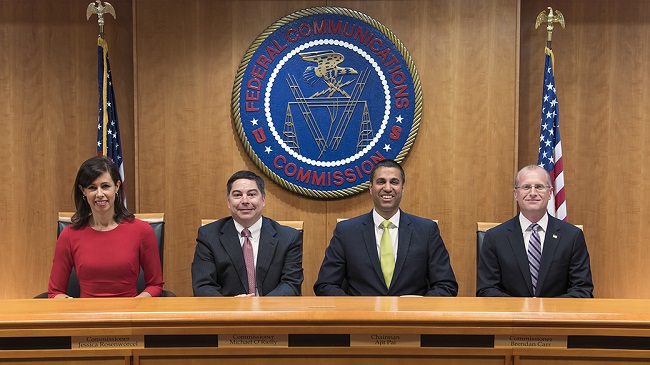 Commissioner Brendan Carr (pictured above, far right), who masterminded the regulations, touted them in a statement as a way to “help ensure that every community in our country is 5G ready”. He noted small cells will make up nearly 80 per cent of new infrastructure deployments for next generation networks.

The guidelines would require local governments to conduct review processes within 60 days for small cells being added to existing structures or 90 days if a provider wants to put up a new small cell pole. The rules would also curb excessive siting fees, allowing governments to charge only a “reasonable approximation” of their costs associated with the review process. The FCC said it would supply a fee schedule of what it deems fair costs.

Local governments would still be able to conduct “reasonable aesthetic reviews” under the rules, but the FCC said it would provide coaching on other types of local reviews that can block small cell deployments.

The proposal addresses two major pain points, fees and delays, repeatedly cited by US operators as obstacles to small cell deployments, and follows the passage of a separate small cell siting reform order in March. That measure exempted small cells from historic and environmental reviews, and limited the fees operators have to pay for reviews by tribal nations.

The FCC will vote on Carr’s proposal at its meeting on 26 September.