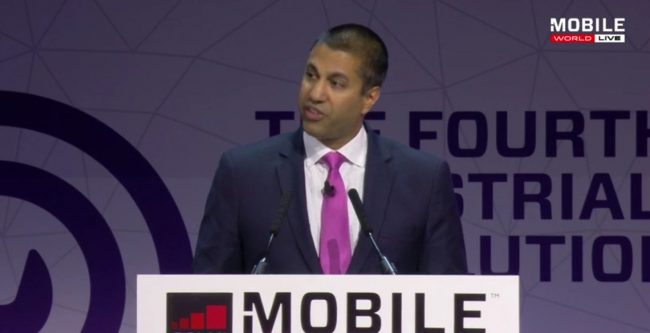 Republican Ajit Pai, barely five weeks into his new role as chairman of the Federal Communications Commission (FCC), pulled no punches in criticising the regulatory approach to broadband pursued by Democrat Tom Wheeler, his predecessor.

He told congress delegates in today’s 5G Economy keynote that the US would now be better placed to attract private investment for broadband and 5G by ditching previous FCC policies.

“The torch at the FCC has been passed to a new generation, dedicated to renewal as well as change,” said Pai. “We’re on track to returning to a successful approach through light-touch regulation.”

In a thinly-veiled attack on Wheeler, he said it was “evident that the FCC made a mistake” two years ago.

That was when the FCC passed the Open Internet Order, designed to ensure net neutrality – the principle that all web traffic should be treated equally – and reclassified broadband internet access as a telecommunications service under Title II of the US Communications Act (1934).

Mobile operators and consumers in the US, claimed Pai, are already seeing the benefits of a more deregulatory approach.

One of his first decisions as FCC chairman was to abandon the agency’s investigation into whether or not the ‘zero-rated’ (free data) plans of AT&T Mobility, Verizon Wireless and T-Mobile US were anti-competitive

“The truth is, customers love getting something for free and want service providers to compete,” said Pai. “Our decision to stop the investigation was done out of respect for those preferences.”

He noted, too, that all four US nationwide mobile network operators either launched new unlimited data plans or modified existing ones following the decision to scrap the zero-rating enquiry – another boon for consumers.

Pai said that previous policies set out in the 1990s and early 2000s – light touch regulation, encouraging facilities-based competition, free use policies (where operators can decide which technologies to use in licensed bands) and freeing up more spectrum for mobile use –  had produced “impressive results”.

“The private sector has spent $1.5 trillion since 1996 to deploy broadband infrastructure and consumers have also reaped rewards,” said Pai. “Nine per cent of consumers have access to three or more facilities-based access providers, and the US leads the world in 4G.”

“We would not have seen such innovation if, during the 1990s, the government had treated broadband like a railroad or a water utility.”