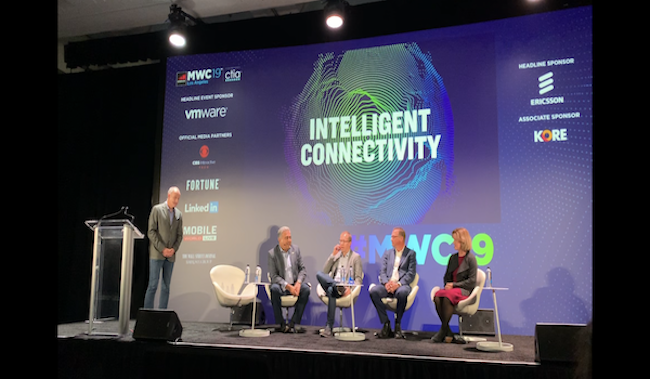 LIVE FROM MWC19, LOS ANGELES: A panel of experts argued players in the IoT market should focus on the business problems they are trying to solve, rather than getting caught up with the technology that underpins the segment.

Phil Wilson (pictured left, standing), managing director of telecommunications strategy and operations at Deloitte, said IoT had nearly reached a tipping point in terms of adoption, but the overall impact of connecting machines with data failed to live up to the hype so far.

“I like outcomes. A port authority could say it has a connectivity problem. It has to increase throughput, it has sustainability goals… connecting the outcome and focusing on the problem statement. When you do that, you get to a tipping point. Focusing just on a technology proof concept means you are rarely going to be able to scale.”

Romil Bahl (pictured right), president and CEO of IoT specialist KORE concurred, noting he was initially confused by some of the conversations he had with customers.

“I’m new to telco, I come from an application to consumer background,” he said. “It first baffled me when I started, when people wanted to talk about the size of the antennas for example. All you need is an out of box connectivity experience for the lifetime of the device. We could say the evolution was too fast for any technology, but we made it way too complex.”

Michael Beesley, VP and CTO for service provider networking at Cisco (pictured, second right), said he doesn’t believe IoT is necessarily at a tipping point yet. However, he noted there was more acceleration and momentum around the value of connecting machines and devices because there was a realisation on actual business outcomes required, as well as more education about the technology.