Eutelsat, Sigfox team to take IoT to the skies 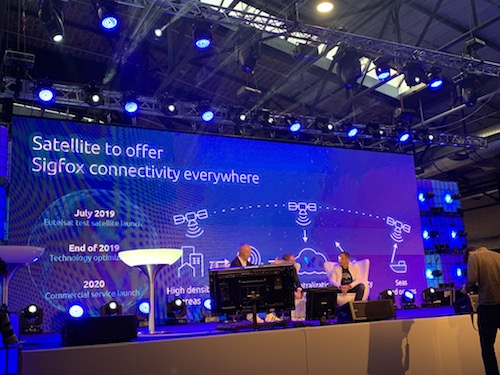 LIVE FROM SIGFOX CONNECT, BERLIN: Sigfox teamed with satellite provider Eutelsat to connect its IoT devices, with a commercial launch planned for 2020.

The companies revealed they will launch a test small satellite in July 2019, before holding another trial to ensure the link between Sigfox’s connected objects and the satellite is seamless ahead of the commercial launch.

Le Moan said the “sky is the limit” for both Sigfox and the IoT, hailing the segment as bigger than the mobile industry itself, with “limitless” opportunities.

Sigfox devices will be able to connect to its network on the ground and to skies once the satellites go live, he said.

“The universe is too small for us,” he said. “We have to take it out of the world, and we need to cover the whole world with satellite. First, we thought we could use Eutelsat for backhaul, but to deliver the full vision of Sigfox we had to go beyond. We have antennas but it’s tough to cover the seas and deserts with base stations.”

Long-term bet
Lenotte added that Eutelsat believed in the IoT space and it was aligned with Sigfox’s vision, describing the move as “a long-term bet”.

“Why do we need satellite for IoT? Well, if you take [the] earth, 70 per cent is water and the remaining is split between 15 per cent desert and 15 per cent populated areas. Of that, only 5 per cent is where the connectivity is.”

With 95 per cent of the earth lacking coverage, Lenotte said partnering with Sigfox was a natural complement for both companies’ ambitions.