EU wants to take Wi-Fi to the people 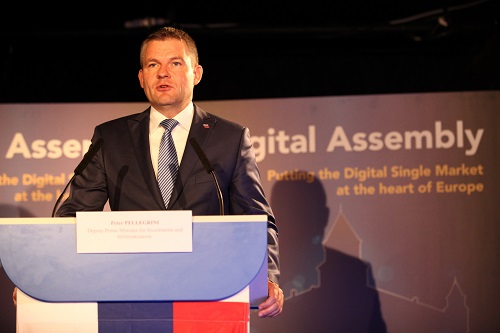 The fund, which will provide high-grade connectivity to over 6,000 communities, including many in areas with under-developed telecoms infrastructure, received the backing of the EU Telecoms Council meeting on Friday.

The WiFi4EU initiative was initially announced by EC President Jean-Claude Juncker in his State of the Union Address in September. During the speech, he described the scheme as an attempt to encourage local authorities to provide high-quality Wi-Fi access in major communal areas including parks, squares, public buildings and libraries.

Successful applicants will receive grants to install infrastructure offering minimum speeds of 30Mb/s in areas that attract people who would otherwise struggle to gain Internet access for cost or technical reasons.

Funding will be allocated to countries spread across the continent and must be applied for on a project-by-project basis.

During the debate, Peter Pellegrini (pictured), the Slovak Deputy Prime Minister for Investments and the Information Society, said: “This decision brings direct benefits to people and shows that Europe works for them.

“We should not lose sight of the need to bring high-speed internet, including public free of charge Wi-Fi connection, to areas whose inhabitants do not have adequate connection. We must look beyond the more developed regions and ensure that we deliver results to all our citizens.”

Commenting on the Council’s decision to back the plans, EU Commissioner Günther H. Oettinger, who leads the Digital Economy and Society strategy, added: “Connectivity is a key prerequisite for Europe’s digital future. It is time to make sure all Europeans, whether in the countryside or in cities, can get access to a quality internet connection. We are happy that the Member States have backed WiFi4EU so swiftly – it also shows the importance and real value of the initiative.”

Once the details of the initiative have gained approval from the European Parliament and get final sign-off from Member States, communities will have two years to apply for a share of the €120 million funding. The commission estimates the first call for applications will be made during the first half of 2017.