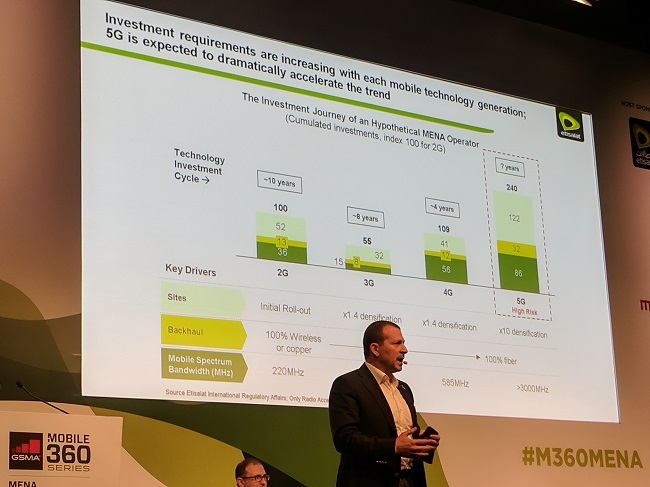 LIVE FROM GSMA MOBILE 360 MENA, DUBAI: The chief legal and regulatory affairs officer of Middle East operator Etisalat warned there are huge challenges ahead for 5G, as the region is tipped to lead the way in deployment of the next-generation technology.

According to a GSMA report released today (9 October) operators in MENA – particularly some of the Gulf Cooperation Council (GCC) States – will be among the first to launch 5G networks, with commercial deployments planned in the UAE in 2019 and Qatar in 2020.

By 2020, the association predicts regional 5G connections will surpass 50 million and 30 per cent of the region’s population will be covered with 5G networks.

But Etisalat’s regulatory chief Kamal Shehadi (pictured) grabbed attention by outlining some of the barriers to success: “If we were to build a 5G network now we would need ten-times more towers than today. This is a cold hard fact the industry has to deal with.”

Shehadi also pointed out spectrum challenges: “For 2G we needed 200MHz of spectrum for each operator. For 5G we will need more than 3000MHz. We are probably one of the most capital intensive industries.”

He also claimed the costs involved in building 5G networks will see operators “cooperate” in new areas for the first time, perhaps around network building.

Despite the issues, Etisalat is ploughing on with 5G trials. Yesterday (8 October) the operator announced its fastest pre-5G live trial, reaching 71Gb/s, setting an apparent global record in the industry.