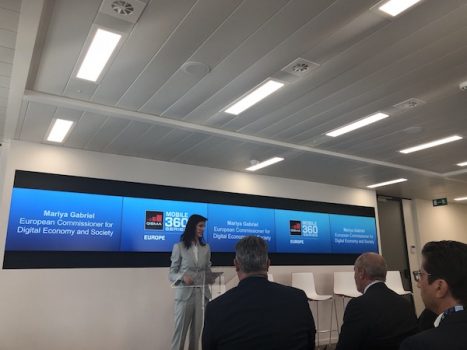 Gabriel said it was imperative to make sure the Commission’s voice was heard during numerous discussions around AI ethics, as the international dimension of the technology grows.

She said the world was already anticipating the consequences, some negative, brought around by AI, but insisted “we should not deprive ourselves from shaping up these changes”.

“It is our duty to ensure the technology is developed and safe, while accountability is clear. Choices should not be biased and we as humans [must] understand how the decisions are made,” she said. “We must ensure AI is developed and applied in an appropriate legal framework, in line with union values and our human rights, with ethical principles and citizens at its heart.”

As part of this effort, Gabriel discussed a range of initiatives and investment plans being developed by the EC in a bid to keep pace with what she described as “fierce international competition”.

Skills shortage
Aside from the ethics debate, she said the EC’s focus revolved around two other dimensions: Europe’s technological and industrial capacity; and preparing society for looming socio-economic changes.

On the second point, she said the EC has long recognised the paramount importance of investment in people, which is perhaps more crucial in Europe than other leading nations.

“Europe is facing a skills gap in digital, particularly in AI,” she said. “We need more data scientists and engineers who understand AI and this will bring about considerable adjustments on the labour market. All citizens should be able to benefit from technology advances and take part with confidence.”

Finally, Gabriel discussed two key initiatives the EU is investing in, aimed at fuelling the continent’s ambitions around the technology.

The first is Horizon Europe, which will support research and innovation with a budget of €100 million from 2021 to 2027. The second is a new programme called digital Europe, with €2.5 billion investment earmarked for developing a range of applications including data access.

“Achieving ambitious goals will not be possible without joining forces,” she added.