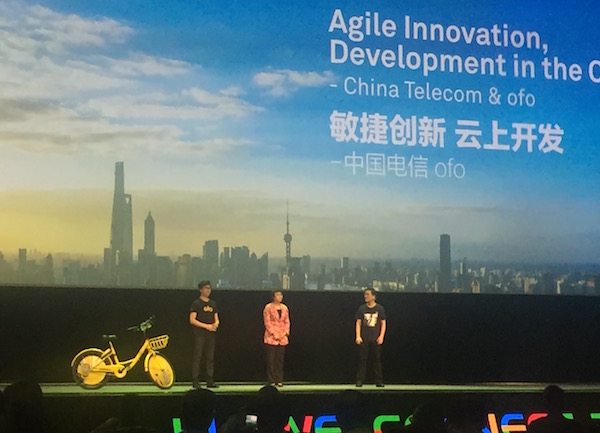 Ofo co-founder Xue Ding (pictured, left) said during a presentation the high power efficiency and huge capacity of NB-IoT make the technology ideal to deliver its smart locks, which are really the brains of its operations.

The company offers what is termed station free pushbike hire, meaning bikes can be collected and deposited from any legal parking spot. Users can locate bikes using their smartphone, and unlock it by scanning a barcode.

However, the process can be interrupted by mobile network congestion or if signals are weak – for example in remote areas: “Using NB-IoT, users will not be stuck because of inadequate capacity,” Xue said.

“The shared bike sector is developing rapidly and users have higher and higher expectations, so we have to make sure we keep up and scale up our operations,” he added.

China Telecom launched its NB-IoT network in May, with coverage reaching 95 per cent of the country, and in June announced the tariff structure of NB-IoT services.

Xiang Huangmei, a VP at China Telecom’s Beijing branch (pictured, centre), said the low power consumption of the NB-IoT chip in the lock means the battery will last eight years to ten years, so it will never need to be replaced during the standard lifecycle of an Ofo bike.

The NB-IoT network, deployed on the 800MHz band, offers good indoor and outdoor coverage, the VP said citing car parks as an example. One base station can support 100,000 devices over an area of 2.5 square-km.