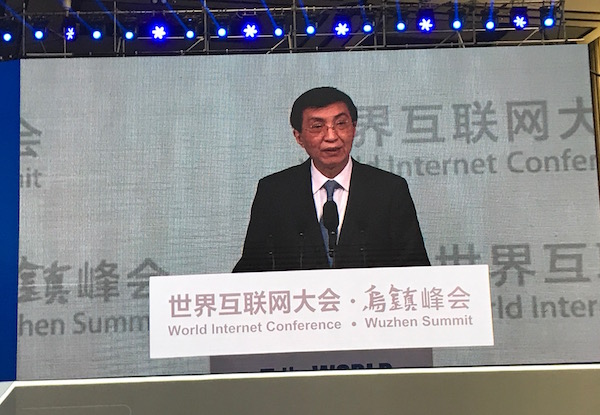 LIVE FROM WORLD INTERNET CONFERENCE, WUZHEN, CHINA: A member of China’s Politburo Standing Committee revealed the country is prepared to work with others to promote innovation in the digital economy and drive balanced, sustainable and inclusive economic growth.

Wang Huning (pictured) opened the fourth WIC by noting global cross-border data flows increased 45 times over the past decade and continue to grow rapidly. The presentation was his first major speech as a member of the country’s top decision-making body.

“Information and data have become important factors of production driving global economic growth. So we should promote the orderly flow and sharing of data in greater scale in broader areas so the dynamism and creativity of information resources will be fully released,” he said.

China’s cross-border e-commerce increased from CNY2.1 billion ($317 million) in 2012 to CNY6.7 billion in 2016. He said China wants to work with the international community to promote the internet and the digital economy.

Narrowing the gap
Global internet penetration in 2016 was 45.9 per cent, Wang noted, explaining: “We should increase the coverage of the internet, build information infrastructure and narrow the gap between different countries and groups.”

Wang, previously a professor and a senior adviser to three Chinese leaders, added: “on the basis of respecting cyberspace sovereignty, we should also promote connectivity in cyberspace”.

The issue is important because “we are all participants” in internet usage “and these issues should be conducted after thorough consultation with all parties”.

WIC is China’s top public cyber policy forum and is organised by the Cyberspace Administration of China (CAC), which oversees internet regulation, including censorship.