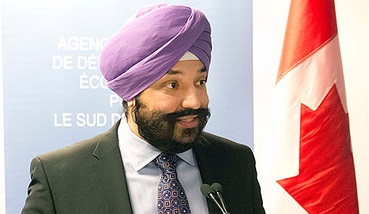 Canada’s innovation minister said the government is targeting reductions in the price of the country’s wireless services, greater competition and improved coverage in rural areas.

In a speech at the Canadian Telecom Summit, the country’s Minister for Innovation, Science and Economic Development, Navdeep Bains (pictured) said the government would encourage competition and investment in the mobile sector to address rising prices.

As part of its initiative, the govenment will work alongside regulator the Canadian Radio-television and Telecommunications Commission to assess widening the scope of Wi-Fi based services in a bid to open the door for lower-cost providers.

To improve coverage, a consultation into 5G was launched, alongside new legislation to encourage satellite services to serve rural and remote communities.

“These services are no longer luxuries,” Bains said, adding: “They are basic tools for all Canadians regardless of where they live. They need these services to do their jobs, conduct business, learn new skills and build communities.”

“Our government is prepared to work with this country’s telecom providers to ensure that Canadians have access to the services that allow them to compete in a global and digital economy.”

Competition concerns
The initiatives are the latest attempt by Canada’s authorities to increase competition and reduce prices for consumers.

Bell, Telus and Rogers dominate the country’s wireless sector. According to GSMA Intelligence Q1 2017 estimates, the three players have an 88 per cent market share between them, with the remainder divided between a range of specialist rural and regional operators.

When the country’s Competition Bureau approved Bell’s acquisition of regional player Manitoba Telecom Services in February, it warned any further consolidation would face close scrutiny. It also placed a number of conditions on the deal to encourage competition.