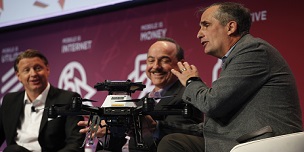 The next generation of mobile technology will be a key enabler for disrupting traditional business models, claimed a panel of senior industry execs on Monday.

“Complete business models are changing,” said Ralph de la Vega, vice chairman of AT&T. “Once we have data in the cloud there will be no stopping industries from disruption.”

Vega pointed to Airbnb and Uber as examples of new entrants having a significant impact on established businesses.

In future, 5G will have a much wider influence in areas such as real-time monitoring of IoT sensors, due to its low latency attributes.

Hans Vestberg, Ericsson CEO, reinforced this viewpoint: “2G, 3G and 4G were very consumer focused in terms of usage models. 5G is very different by being programmable for a very wide set of use cases, as well as providing huge efficiency increases.”

“We’ve tested 5G at 25Gb/s on our test rigs, and are now understanding better the options available regarding use cases. Disruption is coming, but it’s only just starting,” added the Swedish exec.

de la Vega reckoned that 5G would start to be deployed in 2018. Brian Krzanich, chief executive of US chip giant Intel, agreed that “hardware and the fundamentals” would be established by that time.

Vestberg, however, thought it would not be until 2020-21 that 5G started to take traction. “We estimate there’ll be 150 million 5G subscribers in that timeframe, with some pre-standard commercial networks arriving beforehand,” he said. “We don’t expect the standard will be set until 2020.

As for the verticals that will see biggest disruption from mobile and wireless technologies, de la Vega pointed to healthcare. He gave an example of nano sensors injected into the blood to detect cancer cells early, combined with big data analytics to interpret the information. Vega asserted that cancer “would become a manageable disease before too long”.

Vestberg agreed that healthcare would see disruption, but perhaps more in the long term as the industry was so heavily regulated. He said the media industry, including the way TV is consumed, would undergo a greater upheaval in the shorter term.

Another disruptive and new opportunity, argued Krzanich, was for companies to manage large quantities of data generated by IoT sensors. “If you want to follow the dollars, it will not be in silicon but in big data analytics,” he said.