5G hype to be reflected in reality — Cisco CEO 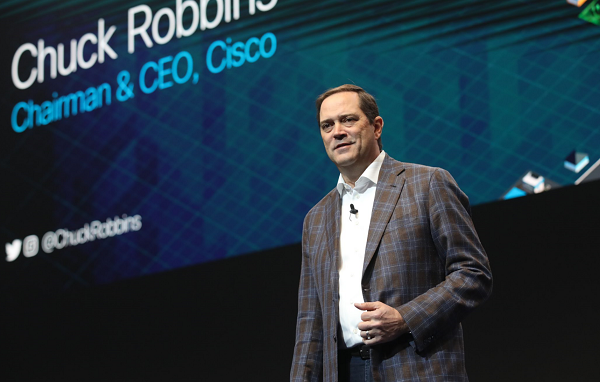 Chuck Robbins, CEO of Cisco, took to the stage at MWC19 Barcelona to proclaim that after years of thinking and talking about 5G, the next-generation of mobile technology has finally arrived.

And, he said 5G is one technology that feels like the hype is going to be reflected in the reality.

“We are truly embarking on incredible times,” he said. “As we think about this next phase that we’re getting ready to enter into, it is going to be like no other phase we’ve ever seen.”

Robbins cited some statistics to illustrate what lies ahead, based on the latest Cisco Visual Networking Index report. “We believe in the year 2022 … there will be more traffic created than there has been created since the inception of the internet,” he said.

Among other forecasts, Robbins said there will be more than 400 million 5G connections in three years.  “We may be off, but if we’re off it’s probably going to be higher,” he added.  There will also be 4 billion machine-to-machine connections. “IoT is going to become very real as we move forward.”

And these connections are going to generate far more traffic than today, said Robbins, who suggested it could be up to six times higher.

“It’s going to be massive scale. And this has huge implications for all, making possible the creation of new applications and bringing new opportunities for a broad range of industries, from mining through to autonomous driving.”

He also touted the technology’s potential to boost connectivity all over the world.

However, Robbins warned that mobile operators will have to think differently about how they architect the underlying network technology in the future. “The technology you put in the network is going to be different from everything we have ever built,” he said.

Robbins emphasised the need to work with partners to build out new capabilities for enterprise, for example.

He pointed to the achievements of Cisco’s partner Rakuten, which is building the first new mobile network in Japan in 10 years.

As explained by Mickey Mikitani, founder, chairman and CEO of Rakuten, the operator’s new network is very different from what has been built before.

He described it as the first end-to-end, fully virtualised, cloud-native mobile network that uses little hardware, costs much less to build and maintain, and is 5G-ready from day one.

Mikitani’s parting message, and perhaps challenge to other mobile operators, was: “Our philosophy of network is completely different. And we are presenting a totally new concept for mobile networks.”