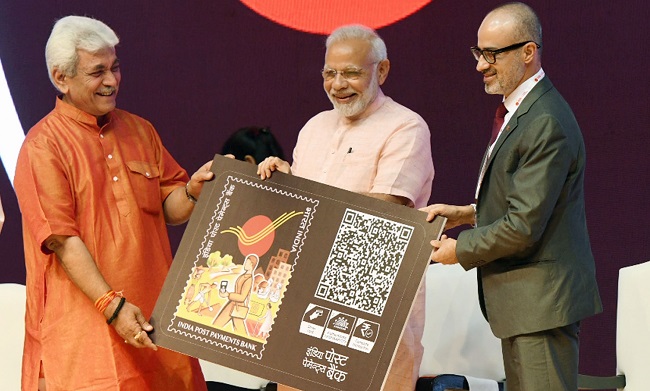 The service will be operated by a division of the country’s postal service with postmen able to take deposits and process transactions during their rounds using smartphones. Users are also able to deal with their own finances using the consumer-facing mobile application.

Although the majority of transactions can be performed at customer homes, consumers must open the accounts at a post office branch.

In a statement, Modi (pictured, centre) said the service will allow banking services to reach the most remote areas of the country, adding: “The postman has long been a respected and accepted person in the villages…the trust on the postman remains, despite the advent of modern technology.”

Payments Banks are able to process a range of basic financial services through mobile and other digital channels including bill payment, interest-paying savings accounts and fund transfer. Insurance and loan services are not offered directly but can be supplied through third party partnerships.

The nationwide launch comes after an eight-month trial in two post office branches.

Competition
Payments Banks are one of a number of government initiatives to reduce the reliance on cash in India and boost financial inclusion. Several companies have already launched the services including leading mobile wallet provider Paytm and a division of mobile operator Bharti Airtel.

Although the postal bank service is primarily aimed at those without current access to banking facilities in remote and rural areas, there are likely to be significant cross-overs between this service and those already on the market.

Paytm and Airtel payments banks reported initial success with their platforms, however both subsequently ran into regulatory issues.

Paytm has been unable to open new accounts since 20 June after violating its terms of operation. It is currently able to serve existing account holders, but has not revealed when it expects to recruit new customers.

After being the first company licenced to launch its bank, Airtel fell foul of customer data guidelines and was force to suspend signing up new customers in January. It was finally able to resume full operations in July.