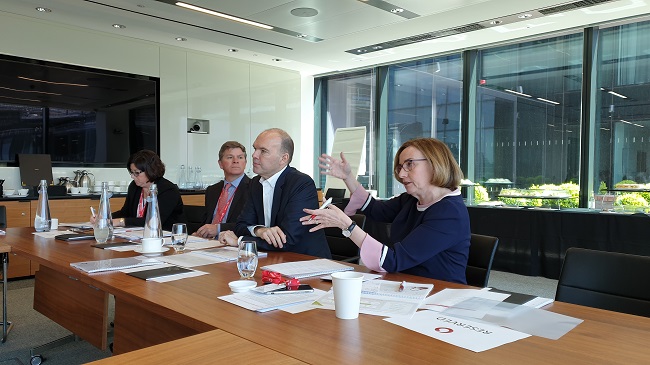 Nick Read (pictured, second from right) defended a decision to cut the level of dividend paid to shareholders, as Vodafone Group slipped to a net loss due to headwinds and competition in key markets in Europe and Africa.

While he noted good growth in Vodafone’s other operations, the company “had obviously weaker revenue growth progression as we went through the year, and spectrum costs came out higher than anticipated”. This resulted in the board deciding to “rebase the dividend to €0.09 per share”, compared with €0.15 the previous fiscal year.

The move was agreed to “rebuild our headroom and support the transformation that we’re going through at this point of time as a group”. The company today announced plans to launch 5G in the UK; is in the throes of acquiring Liberty Global assets in Germany and Eastern Europe; and is embarking on a €1.2 billion digital transformation of its operations.

Read remained confident it would complete the Liberty Global deal by end-July, noting this would begin to have a positive impact on financials, and appeared to confirm it planned to challenge a recent block on a merger with TPG Telecom in Australia.

The operator yesterday (13 May) outlined a deal to sell its New Zealand business, a deal Read said valued the operation at more than seven-times its EBITDA.

Despite the declines in its numbers in the recent fiscal year, Read said Vodafone began to perform more consistently during the second half, predicting this would “support gradual recovery on our revenue from Q2 forwards” in the current fiscal year.

5G
Read was speaking shortly after Vodafone detailed its UK launch plan for the next-generation technology, initially targeting seven key cities from 3 July with plans to push into 12 by end-December.

In a statement, the operator also claimed it will be the first to enable 5G roaming between the UK, Germany, Spain and Italy, and Read highlighted that compatible smartphones from Xiaomi, Huawei and Samsung will be available on 23 May (as will a Huawei home router).

While heralding the launch, Read took aim at government policies around 5G, noting terms applied to spectrum sales in the UK and Germany were somewhat “onerous” in terms of coverage obligations. He urged the UK government to reconsider a plan to require operators to bid for 700MHz spectrum along with 3.7GHz, explaining a proposal to jointly cover rural areas is a key bargaining chip in this regard.

Separating the spectrum bands “allows the operators to optimise their network depending on their requirements”, he explained.

Group service revenue declined 4.5 per cent on a reported basis to €36.5 billion.

Read highlighted record-low mobile churn across all of its mobile operations during the year, along with EBITDA increases in all markets except Spain and Italy.