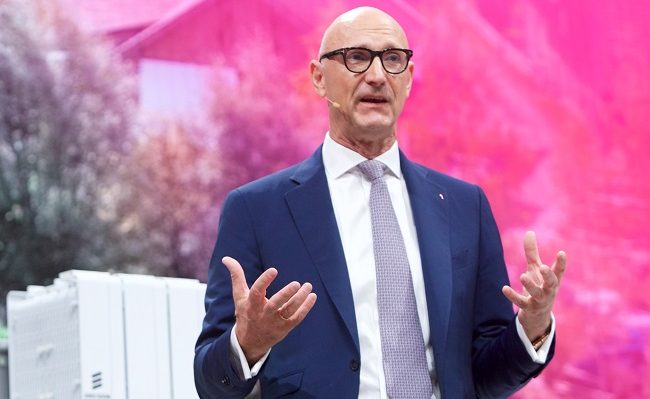 Deutsche Telekom posted strong Q2 figures, boosted by a vigorous performance in home market of Germany and continued customer gains from its T-Mobile US business.

The company said in an earnings statement revenue jumped 7.1 per cent from Q2 2018 to €19.7 billion. A net profit of €900 million, an increase of 90.7 per cent, was attributed to the effects of a charge for its toll system in Germany, which negatively affected the metric in the comparable 2018 quarter.

CEO Timotheus Hoettges (pictured) said the company “remained reliable”, with its business performing well in all areas in the first half of the year.

During Q2, Deutsche Telekom said it extended its “leading position” in the German mobile market, with revenue increasing 1.2 per cent to €5.4 billion.

The company pointed to an increase in average monthly mobile data used by its contract customers, which exceeded 3GB for the first time, while 4G subscribers “used six-times as much data as other customers”.

In its European segment, which accounts for a number of markets across the continent including Austria and Poland, revenue was just shy of €3 billion, a 2.8 per cent increase, with the company pointing to growth in convergence solutions, which is now being pushed across ten countries in total.

US growth
Its US business continued to outperform, with revenue increasing 5.1 per cent to $11 billion, largely fuelled by the addition of 1.8 million customers, bringing its total customer count to 83.1 million by the end of June.

Deutsche Telekom said its US business recorded 1 million net customer additions for the 25th quarter in a row as a result of the gains in Q2. Notably, T-Mobile is nearing completion of a merger with Sprint, after securing approval from the US Department of Justice last month.

Over the first six months of 2019, Deutsche Telekom added it continued to invest at a high level, with capex before expenses for mobile spectrum rising 14.9 per cent to €7 billion.

Investments increased due to the construction and upgrade of networks in Germany, Europe and the US, which was “due to accelerated infrastructure build out in the 600MHz spectrum band”.

Subscribe to our daily newsletter Back
Previous ArticleApple sued for alleged Siri privacy violations
Next ArticleBlog: Why is operator interest in DSS on the rise?