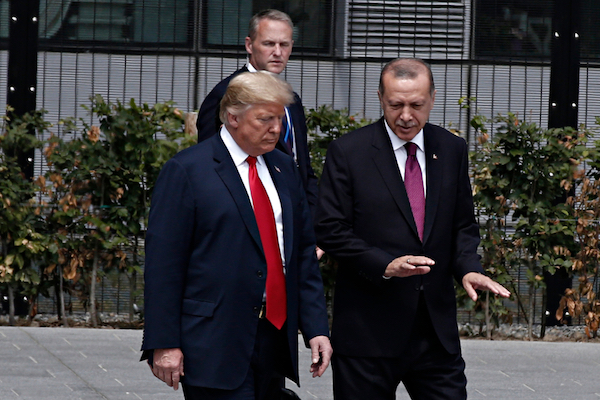 In a speech in the country’s capital Ankara, Erdogan said Turkey would ban iPhones and urged citizens to opt for devices from South Korea vendor Samsung or Turkish brand Vestel.

“Every product that we buy in foreign currency from outside, we will produce them here and sell abroad,” he said. “We will implement a boycott against America’s electronic goods. If they have the iPhone, there is a Samsung elsewhere. We have Vestel.”

The two countries are embroiled in a row over the Turkish trial of US pastor Andrew Brunson, who is accused of helping a group which was part of a failed military coup.

President Donald Trump (pictured, left) last week doubled tariffs on Turkish steel and aluminium imports, which led to an economic crisis after the value of the country’s currency (the Lira) plunged.

Apple ban
Associated Press said it was unclear how exactly Erdogan would implement an iPhone ban, while The New York Times noted Erdogan and his ministers have frequently been seen using the smartphone in the past.

In mid-2016, Erdogan was seen using Apple’s FaceTime to rally his supporters to protest on the streets during the coup attempt.

Erdogan also made the technology headlines in 2015 when he urged the country to skip 4G mobile technology and push ahead with 5G.

Three years on, 5G is yet to be commercially deployed anywhere in the world.