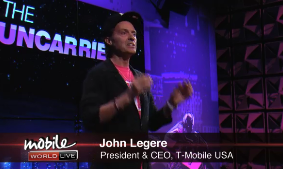 John Legere, T-Mobile USA’s chief executive, wants to ruffle industry feathers by separating device costs from tariff plans, do away with “confusing and misleading contracts”, and rapidly roll out LTE.

Speaking at a New York press event today, Legere is taking a gamble on what he calls an “Un-carrier” attitude to help T-Mobile – the smallest nationwide wireless carrier in the US – claw back market share from rivals.

The simplified tariff plans are not a surprise as they were revealed some weeks earlier. For $50 per month, and with no contract lock-in, customers get unlimited talk, text and web, along with up to 500MB of “high-speed data”. Customers can add a second phone line for $30 per month.

“Only if the user is having a devastating effect on the network will we cut [data] back,” said Legere.

The monthly tariffs can be paid on a pre-paid or post-paid basis.

On devices, Legere says the iPhone 5 will be available in T-Mobile stores from 12 April. The Samsung Galaxy S4 will follow at the beginning of May. The chief executive couldn’t fix a date for the arrival of the HTC One but said it was in the pipeline. The Blackberry Z10 is already available.

Each of these high-end devices will carry an upfront cost of $99.99. The balance is payable through 24 payments of $20. This compares with the $199.99 upfront fees charged by AT&T, Sprint and Verizon Wireless for high-end devices.

Legere says an iPhone 5 and monthly data plan bought from T-Mobile would be $1,000 cheaper – over a 24-month period – than an iPhone 5 tariff (with comparable data) from AT&T. And – unlike the iPhone 5 on other networks – added the chief executive, T-Mobile’s will have HD voice.

If a T-Mobile customer wanted to leave the T-Mobile USA network, outstanding payments on the device would have to be paid before it was unlocked. Alternatively, the device could be traded in – at “fair market value” – at a T-Mobile store.

By separating tariff plans from devices, Legere says customers are given much more flexibility as they are not forced into price packages that carriers dictate for particular models. Device upgrades are also easier, argued the chief executive, as post-paid customers don’t have to wait until their two-year contract expires before choosing a later model.

T-Mobile has also launched LTE in seven major metropolitan areas. It aims to cover 100 million of the US population with the 4G technology by this summer, extending to 200 million by the end of this year.

“At the moment, we’re rolling out 2X10MHz LTE,” said Legere. “But following the MetroPCS acquisition, we expect to increase that to 2x20MHz in the 2014 and 2015 timeframe.”

T-Mobile says it already has a nationwide HSPA+ network in place, with theoretical top speeds of 42Mb/s.