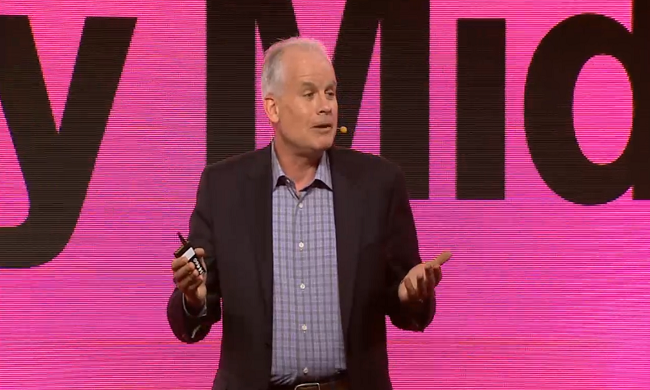 T-Mobile US CTO Neville Ray (pictured) insisted the operator is currently not thinking about merging with Sprint, but said any such tie-up would prove beneficial to its rival’s customers.

Ray, speaking at Citi’s European and emerging telecoms conference in London, said if there was an opportunity to strike any merger this year “we will go at it”, but was adamant he was more than optimistic about T-Mobile’s future in its current form.

In particular, he hailed the company’s network growth and performance improvements over the last three years, stating AT&T and Verizon were now playing catch up when it comes to LTE, and Sprint had little or no chance of competing.

On a potential merger between the two, which has been mooted for years, Ray said T-Mobile’s network superiority over its rival would mean network integration would be a good thing for Sprint customers, while talking up his company’s ability to conduct large scale mergers.

He pointed to the company’s deal with MetroPCS, struck in 2013, as an example.

“We are good at doing this and have a proven track record. MetroPCS was at a smaller scale but it still meant integrating thousands of cell sites and millions of customers,” he said.

He continued: “Four years post that, the network integration is done, as is the customer migration. When I think about network integration, and migrating Sprint customers on to a better network performance and better coverage, it is a good thing. Migrating from a lesser performing network to a better one is a plus. This is also a fact that won’t change, given the capital structure of both companies.”

Unlimited tariff
Ray, addressing a wide range of topics, including 5G and small cell strategy, also expressed confidence the company’s unlimited tariff would be sustainable long term, despite the fact rivals including Verizon had come to market with a similar offer.

He said T-Mobile had laid the foundations for unlimited with Binge On, hailing the zero-rated video streaming service as “the most innovative thing we have done”, before adding the regulatory situation in the US was now more favourable for such initiatives.

“The regulatory environment has changed. Its probably softened, and we are in a good space for sustaining these products,” he said. “Verizon may have also started doing it, and that means more competition, but we have the best network to support it.”

He said less than 1 per cent of its customers had opted out of Binge On, which offers an optimised video experience, since its launch.