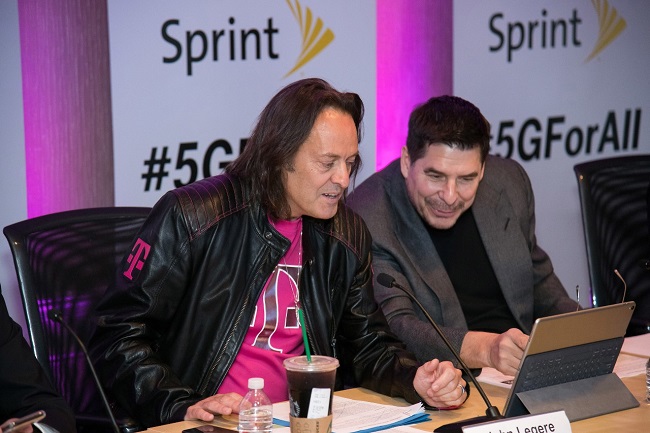 T-Mobile US CEO John Legere (pictured, left) closed the door on Chinese equipment vendors, stating the operator will not use kit from Huawei or ZTE for its 5G network.

In prepared remarks released ahead of a hearing before Congress, Legere said the operator does not use gear from either company “in any area of our network” and “will never use it in our 5G network”.

He added the latter statement would still apply in the event the operator’s proposed merger with Sprint is approved: “New T-Mobile will buy network equipment only from trusted network equipment suppliers with a strong security track record in the United States,” he wrote.

T-Mobile already announced 5G equipment deals with Ericsson and Nokia worth a total of $7 billion. Legere said the exclusion of Chinese vendors will provide a “critical lift” to such competitors and help protect “the 5G supply chain for the United States and our allies”.

Huawei and ZTE have repeatedly denied they pose a security threat.

Legere is expected to read out the remarks during a hearing before Congress on Wednesday (13 February), as he and Sprint chairman Marcelo Claure (pictured, right) once again defend the merger.

In December 2018, the deal received approval from a handful of US regulators after reports T-Mobile and Sprint’s parent companies agreed to review or drop Huawei equipment from their network plans.

Approvals from the Federal Communications Commission and the antitrust arm of the Department of Justice remain outstanding.