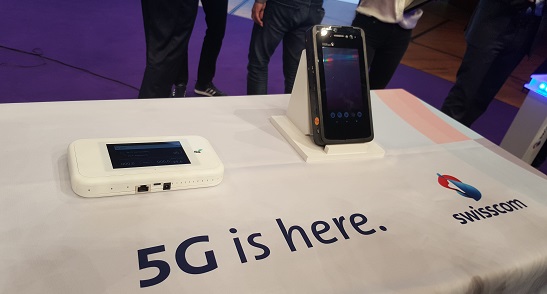 Swiss market leader Swisscom became the latest company to claim a 5G first, after connecting a prototype mobile device running a Qualcomm 5G modem to its live test network in the city of Lucerne.

Swisscom’s demo was performed in front of international media at an  enterprise customer event and used a device with a smartphone form factor running a Qualcomm 5G mid-band modem.

The prototype device was still relying on a wired connection two weeks ago, Swisscom said, but was now able to fully connect to its 5G network, described as a “live network over test frequencies”.

Alongside the Qualcomm-powered device, the operator also connected a hotspot from Taiwanese manufacturer WNC and performed the demo in collaboration with vendor partner Ericsson.

In a statement, Qualcomm president Cristiano Amon said the connections were the first devices to make an over-the-air connection anywhere in the world using 3.5GHz spectrum, adding the devices marked “an important milestone for the mobile industry in Europe”.

At the event, Swisscom CIO and CTO Heinz Herren said: “Today we present our next big step for Switzerland, and perhaps the world,” adding the company was demonstrating global firsts “in the race for 5G”, something he said the company hoped to continue.

In early September, Qualcomm and Ericsson claimed a “critical milestone” on the road to 5G by successfully trialling a 5G device with a smartphone form factor on mmWave frequencies.

Aesthetically the device used then is similar to the one in the Swisscom demo.

5G rollout
Swisscom’s 5G test network is operational across six urban centres. It plans to have 60 areas on the network by the end of 2019, covering every city and tourist hotspot in the country.

By the second half of 2019, the operator expects to be able to sell 5G handsets from “several major handset vendors” Herren said, with commercial connections on the network at the same time.

In terms of European operators, Swisscom has been among the most bullish on network rollout, previously announcing its intention for a mobile launch by the year-end and aggressive timelines for full availability.

Although many of the early headlines surrounded perceived 5G leadership in parts of APAC and North America, Herren stated he believed all of the regions were currently in the same position of waiting for devices and building test networks.

Subscribe to our daily newsletter Back
Previous ArticleNCSOFT readies mobile gaming push
Next ArticleCommScope acquires Arris for $7.4B