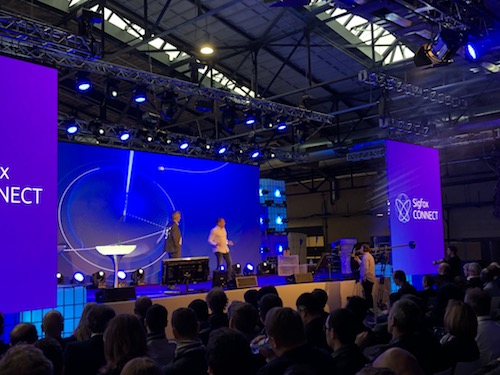 LIVE FROM SIGFOX CONNECT, BERLIN: Sigfox co-founder Ludovic Le Moan (pictured, right) confessed the way in which data is used rather than core technology will determine the success of the IoT market, as the non-cellular technology player revealed its network now covers 1 billion people globally.

Speaking in a press conference, here, Le Moan said IoT was “not a question of technology” and the market will only truly thrive if the data extracted from connected devices is used in the smartest and most cost-efficient way.

“We are extracting data from everywhere around us, and it will only be a success if we take care of it,” he said. “If you take data from sensors at a higher cost than its own value you are killing the market. By getting the right technology, whatever it is, to create a differential between the core value of data and the cost of extraction, multiplied by billions and billions of data, you create a big industry and a big economy.”

Le Moan continued to highlight the threat from China and the US, “which are leading on data collection”, and urged Europe to develop its own dedicated strategy and leverage data, “our nuclear weapon for digital”, to advance the continent’s verticals: healthcare; energy; and transportation.

The executive’s comments about IoT technology back up the company’s wider message when its solution is compared with alternatives on the market, with both standardised and non-standardised offerings deemed largely complementary to the other.

Indeed, Sigfox’s propriatory solution is one of a number of low power wide area (LPWA) options, with standardised cellular technologies NB-IoT and LTE-M seeing the most traction from operators. In the non-standardised market, Sigfox has focussed its solutions largely on the B2B use case, and the company is joined by LoRa, which is backed heavily by France-based Orange, among others.

As well as unveiling a number of new solutions during the two-day event, Sigfox said its network was now live across 53 countries, covering 1 billion people, with eight countries including Norway, Austria and Kenya recently adding to its footprint.

During the conference, Le Moan said the uptake equated to 3.9 million connected devices, which is forecast to more than double to 8 million by the end of this year.

The company put a lot of its success down to the low cost of its modules, which debuted at $12 a unit, coming down to $2 in 2016 and a $0.20 design now available on an industrial scale.

New solutions
With the company seeing a big demand for industrial use cases, the company rolled out Bubble, a connected device which can be used for asset tracking worldwide.

The Bubble device, a transmitter, is managed by Sigfox’s network operating centre and are accurately located during installation. The device is then able to track assets, over a range of less than one metre to one hundred metres, and when a Sigfox-powered device enters the range of a Bubble it sends the ID to the cloud along with its own identification.

Sigfox highlighted the solution’s use case for the travel industry, for example tracking luggage in airports, and also for tracing children or pets.

Sigfox said a unique selling point of the service is that it doesn’t use GPS for location tracking, which means it requires significantly less energy.