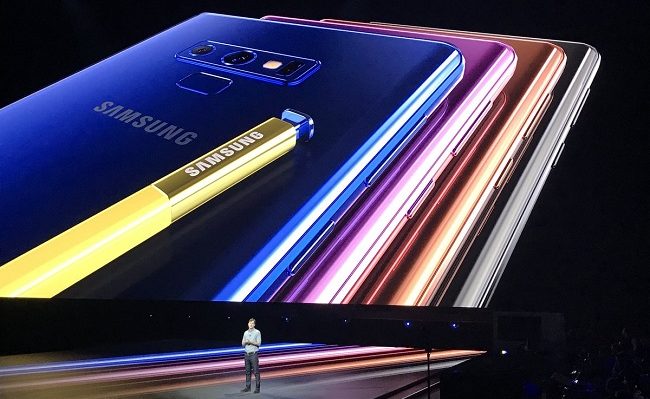 Samsung stuffed a massive battery and more storage than ever into its new Galaxy Note 9 smartphone, which was served up alongside a revamped S-Pen with Bluetooth functionality at the company’s launch event today (9 August).

Though the Note 9 looks very similar to its predecessor, albeit with a slightly larger 6.4-inch display, Samsung crammed in some major upgrades.

It now comes with 128GB of on-board storage as standard, but is also available in a model with 512GB of memory expandable up to 1TB with a microSD card. Samsung also fitted a 4000mAh battery into the device, a move it said will help keep users on the go longer.

Other key specs include a Snapdragon 845 processor capable of delivering network speeds of 1.2Gb/s; Android Oreo OS; dual 12MP rear cameras and 8MP front camera; and a fingerprint sensor which is now located under the rear camera rather than next to it.

The Note’s trademark S-Pen also got a makeover with new Bluetooth connectivity enabling the stylus to control a number of functions on the phone. By clicking a button on the S Pen, users can now take photos, advance a slide presentation or play music.

More tricks could be on the way, as Samsung said it plans to release a software development kit for the S-Pen to allow developers to dream up new tools.

But these features mean the Note 9 will one-up the costly iPhone X on price. The 128GB version is priced at $1,000, while the 512GB model will cost a cool $1,250. The ordering process opens on 10 August and the phone will hit shelves on 24 August.

Telling time
Samsung had a few other devices up its sleeve, including the Galaxy Watch, the successor to the Gear S3, and a multi-function wireless charging pad.

Though it looks a lot like a classic timepiece, Galaxy Watch features Bluetooth and LTE connectivity, with wireless charging capabilities along with a heart rate monitor for health and fitness tracking. The device comes in two sizes, 42mm and a 46mm, in two colors: rose gold and black.

The Bluetooth edition of the device will become available on 24 August, priced at $330 for the 42mm model and $350 for the 46mm version: the LTE variant will launch through US operators and select retailers later this year, with pricing to be confirmed. 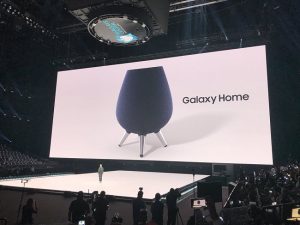 In a surprise turn, Samsung shared a glimpse of its forthcoming smart home speaker, the Galaxy Home (pictured, right). It didn’t provide a launch date or pricing for the device, but noted it will feature the vendor’s in-house Bixby personal assistant and an AKG sound system.

More details on the speaker will be announced “soon”, Samsung said.