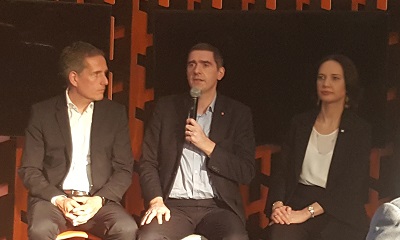 Orange talked-up the impact of a “European first” 5G fixed wireless access (FWA) test, which it said would help shape the company’s strategy across several markets and give it a head start on working out the business case for the technology.

Speaking to Mobile World Live at an Orange Romania event to discuss the findings of the trial in the city of Cluj-Napoca, Orange SVP of Radio Networks Arnaud Vamparys (pictured, centre) said the feedback from customers would help the operator work out when and how to deploy FWA 5G.

“2018 is the year of end-to-end trials on 5G,” Vamparys said. “This one is to offer fibre-like experience for fixed wireless access for households to complement our portfolio in countries where we have not been able yet to connect households to fibre.”

“We did a lot of lab tests last year and now we need to face customers and find out if they are satisfied with this sort of solution,” he added, noting performing early field trials of the technology would offer Orange an advantage over rivals, as it would be able to properly assess the 5G business case across its footprint.

Exceeding forecasts
The trial is the first of a number of live 5G tests announced by Orange in February and is still underway, having begun in early June. The operator said it was Europe’s first 5G live multi-vendor FWA network test, held in collaboration with Samsung and Cisco.

A total of 15 customers living in a selection of different building types took part. Each was encouraged to use multiple high-bandwidth applications simultaneously including 4k TV and cloud gaming: network performance and feedback have been regularly collected to assess technical issues and consumer response.

The operator used mmWave technology to provide the fixed connectivity from a 5G base station, following a deal with the country’s regulators to access the spectrum required.

Europe’s operators have stepped-up the speed and scale of 5G test networks in recent months and the latest announcement is one of a number of “firsts” claimed in recent weeks for both fixed and mobile 5G. It also follows tests of mmWave technology for similar use cases in the US.