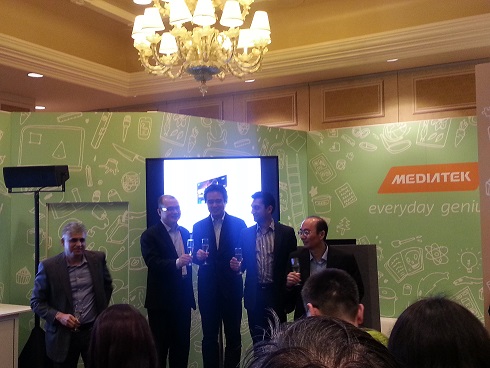 LIVE FROM CES 2015: Taiwanese silicon vendor MediaTek has signed up Google and Sony as customers for its System-on-Chip (SoC) hardware for Android TV, as the fast-rising company targets growth beyond low and mid range smartphones.

Japanese giant Sony yesterday announced that all of its 2015 televisions will run on the new Android 5.0 Lollipop TV platform. “This will extend the Android experience to TV in Sony’s first Android TV,” commented MediaTek’s CK Peng at a media briefing this afternoon.

MT5595 has already entered into silicon mass production and MediaTek claims consumers can expect Android TV devices to be commercially available by March 2015.

The move into the TV space is not a new one for MediaTek. The company claims that three in every five televisions today are powered by its silicon, and its presence here in Las Vegas indicates that it wants to make more of a noise around its products.

“Last year was our coming out party,” commented CMO Johan Lodenius, in reference to the company’s efforts to embark on a global marketing campaign via the ‘Everyday Genius’ tag.

Having established a strong set of customers in what it calls the ‘super mid-range’ smartphone space – such as Lenovo and Amazon – MediaTek aims to score further deals in the Smart TV sector as well as wearables and other connected devices.

“The next step is to do this for ‘everything’, not just ‘everybody’,” said Lodenius.

To that end, the company also today announced its MT2601 SoC for wearable devices based on Google’s Android Wear software.