Global mobile connections passed the 7 billion mark in April 2014; by year-end we expect global connections to match the 7.2 billion global population total projected by the United Nations. The fact that there will soon be as many mobile connections as people on the planet is a huge achievement for our industry. However, while this is a significant milestone, it would be wrong to assume that almost every single person on the planet is now connected to a mobile network. In reality only around one in two people worldwide are actually subscribed to a mobile service to date.

The industry has traditionally sized market growth by referring to the number of subscribers or customers, but these indicators are misleading as they actually represent the number of SIM connections registered on a mobile network rather than people. In this research note, we emphasise the importance of measuring unique mobile subscribers as opposed to SIM connections, and the difference between mobile phone owners and mobile users – using examples from China and India.

Understanding the relationship between connections and subscribers
There is an important difference between the number of mobile connections – the metric traditionally used by the industry to measure market size and penetration – and what we term unique mobile subscribers. The latter refers to a single individual that has subscribed to a mobile service and that person can hold multiple mobile connections (i.e. SIM cards).

If one individual actively uses two SIM connections, that person will be counted by the industry as two mobile connections although he or she is only one mobile subscriber. Multiple connections ownership has been distorting mobile market penetration figures for many years, as standard practice for measuring penetration has been to divide the number of registered SIM cards by the country’s population. But we believe that studying the correlation between unique subscribers and the population provides a more accurate view of market penetration, maturity and prospects for growth.

For instance, China reached 1.25 billion connections in Q4 2013, and we expect connections to overtake the country’s 1.39 billion population total during the middle of next year. However, this does not mean that every Chinese citizen will have subscribed to a mobile service. Our research shows that, as of Q4 2013, Chinese subscribers held 1.79 SIMs cards each, on average, which meant that 630 million mobile subscribers in China accounted for the country’s 1.25 billion connections – less than half of the population.

The SIM ratio is derived from our primary research spanning 1,000 respondents across rural and urban areas in China. Our survey also showed that Chinese consumers in rural areas actively use 1.18 SIM cards each, compared to the 2.03 SIMs used by consumers in urban areas (where 70% of all connections are located).

This is due to the ‘device sharing’ phenomenon whereby individuals do not necessarily need to own a mobile phone to become a mobile subscriber. In addition, total mobile connections do not relate solely to mobile phones but instead take into account all device types (e.g, phones, connected tablets, dongles, routers). Dividing total connections by phone ownership alone would therefore result in an inaccurate measure.

Using India as an example again, 2G-GSM mobile networks cover 87% of the population, which means there are 1.10 billion people in the country (out of 1.26 billion) that can access mobile networks and potentially use mobile devices and services. However, not all of them will become mobile subscribers as they might fall within certain population groups that we consider unlikely to subscribe, or because they share a mobile device with someone in their community.

According to India’s 2011 census, 29% of the Indian population is under 14 years of age, a section of the population we consider unlikely to subscribe to a mobile service. This means that the total Indian population of 1.26 billion is reduced by 29% to reach an addressable population base of 899 million.

Mobile subscriber penetration is therefore unlikely to surpass 71%, unless market dynamics change. In contrast, penetration based on connections is likely to continue growing exponentially beyond the 100% mark, becoming an increasingly unreliable measure of market maturity.

In a recent report the World Bank also highlighted the difference between mobile users and subscribers, explaining that “if a mobile phone exists in a household, then all members could theoretically use it, thereby extending access […]. Take Senegal, where the subscription penetration was 57 per 100 people in 2009, but household penetration was estimated to be 30 points higher at 87. This larger household size can dramatically extend access to mobile phones, considering that on average nine persons are in each Senegalese household.”

Why does it matter?
Estimating unique mobile subscribers from registered SIM connections helps to derive a more accurate view of mobile market penetration and growth opportunity. Operators are changing their reporting methods to reflect this dynamic. Verizon Wireless, for example, now tracks average revenue per account (ARPA) rather than per user, which takes into account that many of its subscribers hold multiple devices and are able to spread their data allowance across several devices or SIMs.

In China, market penetration based on connections is close to 100%, which might be interpreted as a sign that the mobile market is becoming saturated. However, in reality, unique subscriber penetration in China only stands at 46% of the total population (1.39 billion) or 57% of the addressable population base (1.11 billion) – therefore suggesting plenty of room for mobile growth in the country.

The unique mobile subscriber method also helps to better evaluate revenue opportunities in a given country. An operational metric such as average revenue per user (ARPU) – the method used in the industry to measure consumer spending on mobile services – is negatively impacted by multiple SIM ownership. For instance, in India, while monthly ARPU based on connections has been estimated at around $2.50 over the past year, ARPU based on subscribers has been estimated at around $6 on average.

ARPU is traditionally based on mobile connections and on this basis has been in decline in most regions over the last decade. However, when ARPU is considered on a unique subscriber basis, our research shows that consumers in several countries are actually increasing their spending on mobile services.

Next time you encounter data or trends referring to subscribers, customers or users, you should question whether it actually represents the number of people or the number of SIM connections. 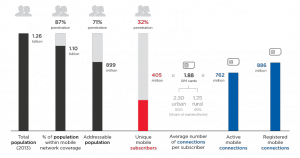