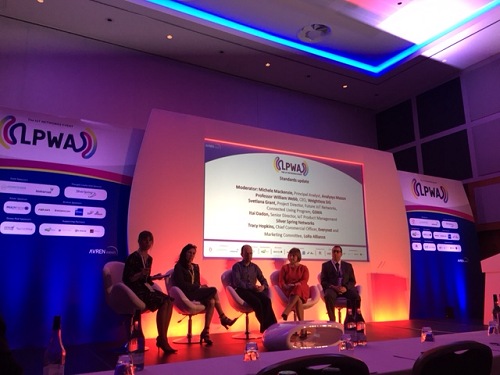 LIVE FROM LPWA WORLD 2017, LONDON: Panellists in a debate covering current and future low power wide area (LPWA) standards were split on whether the variety of specifications and technologies available is hindering the market and putting future growth at risk.

Itai Dadon, senior director, IoT product manager at networking platform company Silver Spring Networks, was firmly of the view the market is being hampered, expressing sympathy for developers over “how much confusion there is out there”.

“All our standards are dealing with the networking and deployment costs for devices, and specifically how they communicate,” he said: “But when it comes to specific use cases, you have to look at how those applications are going to [be] used, and there is such a wide variety of choices… I think it’s slowing down innovation.”

However, Svetlana Grant, project director covering future IoT networks, and connected living program at GSMA, predicted the picture would become clearer moving forward. While it is “inevitable” there would be multiple standards, Grant argued there are questions over how many would survive long-term.

She focused on 3GPP-backed technologies – EC-GSM, NB-IoT and LTE-M – and said it was now a case of analysing the use cases for all three to see if there was a potential for them to merge in the future.

“The market will tell us and guide us through that,” she said, adding: “It’s possible [technologies] will go through phases and two will coexist on the same operator network depending on how they evolve in the next three to five years.”

“At the moment, however, they serve specific purposes and that is a necessary stage.”

Does one size fit all?
Providing a contrasting view, William Webb, CEO of Weightless Special Interest Group, a non profit industry association pushing an open IoT agenda, argued the need for standards themselves may eventually become redundant, given IoT connectivity was centred on software.

He gave the example of instant messaging platform WhatsApp, which essentially does not have standards, but thrived through economy of scale.

“When there is software involved, the choice is much smaller. You can download and delete a software and choose a new one, which is more plausible,” Webb noted.

However, Tracy Hopkins, COO of Everynet and a member of the LoRa Alliance marketing committee, hit back, arguing “one size does not fit all,” due to the different use cases for IoT.

Webb countered by noting “one size also does not fit on cellular, yet we all use the same network”.

Listing a number of different applications, he said: “We all use the same LTE network because that’s the way it works with economies of scale. Nobody bothers to come up with applications that do not fit the network – we find ways to make it work. You don’t see ten different types of cellular networks – you see one.”