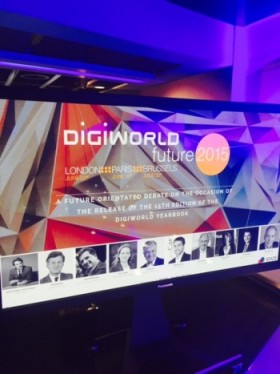 FMC (fixed-mobile convergence), WiFi and 5G were just some of the areas highlighted at the launch of IDATE’s DigiWorld Yearbook 2015 in London this week.

The annual report – this year unveiled at the BT Centre – analyses the major developments shaping the telecoms, internet and media markets. Of the many trends and predictions laid out in the report, principal analyst Roland Montagne told Mobile World Live about the crucial ones he believes will impact the mobile sector in the next five years.

The first one is the acceleration of fixed-mobile convergence. According to Montagne (pictured below), “We have seen big mobile-only players like Vodafone getting massively into the fixed network and this is crucial because mobile operators on the road to 4G and 5G will need continuity of services and if they want to provide quality of service they will need a strong backhaul.”

The report notes that the fixed-mobile convergence trend, “clearly under way in Europe”, is expanding product lines to include quadplay bundles, which are effective in securing customer loyalty, while outside of Europe, it is typically only incumbent carriers that offer quadplay bundles.

Montagne also believes operators need to strategise smartly on the “tricky” matter of frequency allocation to strike the right balance.

“We know that to provide mobile broadband operators need the ‘golden frequency’ on the low range MHz, for example, 700 MHz,” to provide coverage to a large area, but “if they also want to provide a lot of bandwidth, they will need high frequency.”

The report says that in addition to this, “the growing needs created by new technologies, new applications and new user behaviour is pushing federal governments to seek out new spectrum resources.”

“The first digital dividend provided a partial response, by allocating additional frequency resources to mobile services. Today, what to do with the second digital dividend (700MHz band) is a hotly-debated topic across Europe,” the study added.

WiFi
Related to frequency allocation, said Montagne, is the “crucial role of WiFi”.

“We know that nearly 80 per cent of mobile broadband usage is done inside homes. If operators want to offload their mobile network, they will need to provide strong WiFi to households,” he said, which means “the new evolution of WiFi” will be something to look out for.

The Yearbook also says that “In addition to the important role that WiFi plays in offloading traffic, the latest enhancements ushered in by Passpoint and HotSpot 2.0 make it easier to identify smartphone users automatically, and to authenticate and connect them to WiFi hotspots and homespots.”

These new features will enable mobile operators to better manage their customers when connected to WiFi access points.

“Further down the road, the ability to manage quality of service and automatic handover will mean more seamless integration of WiFi into mobile networks,” it adds.

Another recent innovation is the introduction of the ‘WiFi first’ model, out of the US. As its name implies, it is based on making WiFi the primary access network, with cellular networks employed only to fill the gaps, which helps to reduce users’ bills.

5G
Next on Montagne’s list is the need for a “common understanding of 5G”.

“4G was a success in terms of economies of scale and 5G should be the same,” he said.

5G is already being discussed widely, but standardisation has not yet begun, the report notes. “It is nevertheless likely to deliver more agile, more dense and more flexible networks.”

5G is not expected to see the light of day until 2020, even if the mobile ecosystem’s players are already preparing for it, but it is expected to follow through from LTE, using high frequency bands above 6GHz, and bring with it several improvements, including carrier aggregation for disjointed bands, but also in the network core.

“We expect to see speeds of 10Gb/s eventually, shorter latency and increased autonomy, but the spectacular developments surrounding Machine-to-Machine (M2M) and the Internet of Things [IOT] also need to be taken into account and handled seamlessly,” says the report.

Montagne’s next trend is about just that – the future of the IoT, which he believes will either “be supported by SIM card or the deployment of some parallel networks,” adding that there will be “a battle of quickness” for deploying IoT for which operators should be ready.

Another key trend highlighted at the event was ‘the great digital shakeup’. IDATE chairman François Barrault summed it up by saying that “everybody knows how Uber has disrupted the taxi business, and Airbnb the hotel market. But finance, insurance, health and automotive industry leaders have all had to sit up to the risk of digital innovations shaking up their ecosystem, and forcing them to depend on external, unavoidable platforms.”

Also speaking at the event was BT CEO Gavin Patterson who said that BT’s acquisition of EE could be a sign of more dealmaking to come in Europe and the rest of the world.