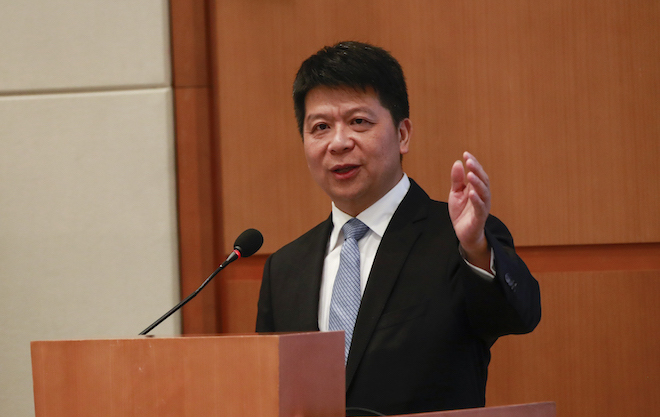 Huawei reported brisk year-on-year profit and revenue growth in 2018 despite mounting concerns about the security of its network gear and a dip in revenue from its carrier group, which accounted for nearly half of overall business in 2017.

The sales growth was driven by its Consumer Business, which increased 45.1 per cent year-on-year to CNY349 billion to take over as its largest division. Carrier Business revenue slipped 1.3 per cent to CNY294 billion, with the unit’s share of total turnover dropping to 40.8 per cent from 49.3 per cent the previous year.

In a statement, Guo said the company will continue to strictly comply with all relevant standards to build secure, trustworthy and high-quality products: “As we work towards this goal, we have been explicitly clear: cybersecurity and user privacy protection are at the absolute top of our agenda.”

“The easiest way to bring down a fortress is to attack it from within. And the easiest way to reinforce it is from outside. Moving forward, we will do everything we can to shake off outside distractions, improve management and make progress towards our strategic goals.”

Huawei is locked in battle with the US over the country’s moves to block operators and goverment departments from using the vendor’s equipment on the grounds it poses a risk to national security. Huawei strenously denies the assertion and initiated legal action earlier this month.

Smartphone strength
In 2018 the vendor shipped 206 million Huawei and Honor smartphones, up 35 per cent from 2017. The company said shipments of the P20 exceeded 16 million units in 2018.

Revenue in its Enterprise Business increased 23.8 per cent to CNY74.4 billion.

The company recorded double-digit growth in the four major regions it operates in, with EMEA leading with a 24.3 per cent year-on-year increase to CNY205 billion. It attributed the increase to growing sales of high-end and mid-range smartphones, a growing share of the smartphone market and the accelerated pace of digital transformation in its enterprise division.

The company said it signed more than 30 commercial contracts for 5G and shipped more than 40,000 5G base stations worldwide as of end-February.