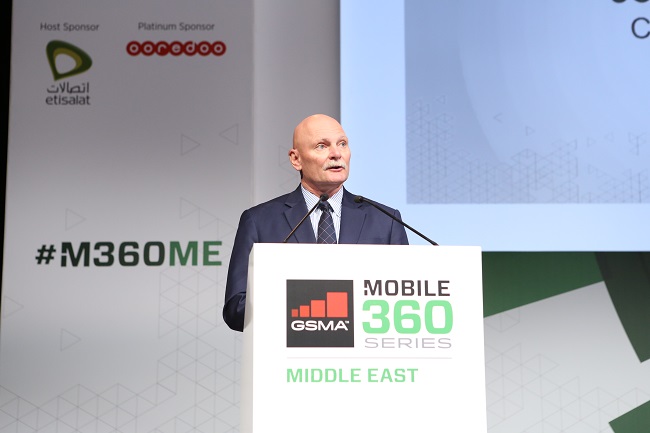 LIVE FROM GSMA MOBILE 360 MIDDLE EAST: John Hoffman, CEO of GSMA Ltd, opened this morning’s keynote session with a warning that future success for the region’s mobile economy depends heavily on strong collaboration between the mobile ecosystem, policymakers and regulators.

“If governments can create a flexible, forward-looking and fair regulatory environment, we can further nurture and encourage the innovation enabled by mobile technologies and services,” he told delegates at the ‘Navigating Towards Connected Societies’ session.

Highlighting the impact mobile is having on the Arab States economy, Hoffman cited findings from a new GSMA report that show mobile contributed $115 billion to regional GDP (4 per cent of total GDP) in 2014, with this figure expected to grow to $160 billion (4.5 per cent) by 2020.

And he stated that the mobile ecosystem supported 1.3 million jobs across the Arab States in 2014, a figure expected to surpass 1.5 million by 2020.

Four steps
Hoffman outlined four key ways in which the region’s policymakers and regulators in the region can help drive further development of their digital economies.

First up, he said the release of more internationally harmonised spectrum for mobile broadband services will fuel network investment, increasing capacity and coverage.

The introduction of incentives to encourage mobile operators to deploy infrastructure in remote and economically challenging areas was also urged.

Thirdly, Hoffman wants to see a revision of taxation policies to encourage adoption and usage of mobile services as well as greater investment in networks.

And he called for policymakers to hone their competition policies to improve the business case for rolling out new digital infrastructure and increasing connectivity.

“With digital services enriching and enhancing the daily lives of people around the world, we encourage governments in the Arab States to take these actions sooner rather than later,” Hoffman concluded. “Underpinned by enlightened regulation, a vibrant mobile economy can continue to generate substantial socio-economic benefits for people across the region.”