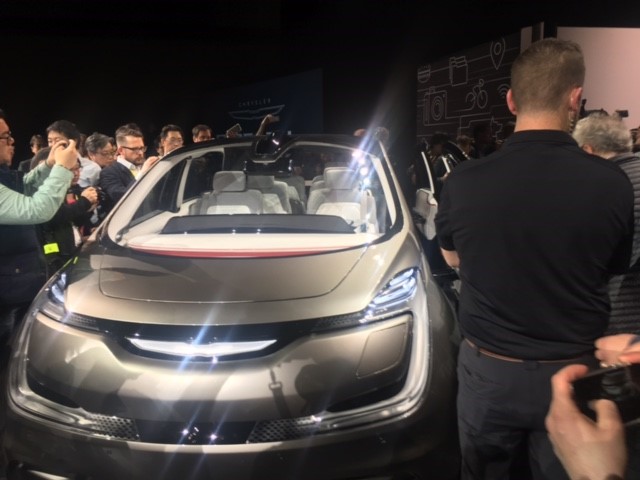 LIVE FROM CES 2017, LAS VEGAS: Fiat Chrysler Automobiles (FCA) unveiled Portal, the company’s vision for a new battery-powered autonomous car that has been designed “by the millennials for the millennials”.

The new car, which at this stage is only a design concept, resembles something of a minivan, with a focus on bringing connected and autonomous driving to the family transportation segment.

In a press conference, the company’s four spokespeople said millennials had worked inside the company’s design and engineering function to come up with the idea, insisting that this group of the population was most technology savvy, environmentally aware and cost conscious.

In terms of technology, one of the most stand out features of the Chrysler Portal is that it runs on battery power, and is estimated to provide more than 250 miles of range on a full charge.

The company further talked up the car’s ability to seamlessly integrate with mobile devices, providing eight docking stations, and giving a capacity of six individual passengers access to their choice of multimedia content from their smartphone. This, the company added, was part of their vision to allow passengers to access internet cloud-based applications, thus creating a community within the vehicle around content sharing of social media, games, music and other rich multimedia.

As is common with a lot of connected cars in development today, Fiat Chrysler said the vehicle is also able to recognise the driver through voice and facial recognition technology, giving it that added personal touch.

There are also modular 360 degree cameras in the mirrors of the car, while the exterior can be further personalised by lighting colour.

While the vehicle does indeed sound impressive, and looked impressive when it was driven out on stage at CES 2017, it may never commercially see the light of day.

Speaking on the sidelines after the event, the design team admitted that at this stage it was only a concept. Indeed, it often takes a long time for concept cars to enter actual production, if ever.