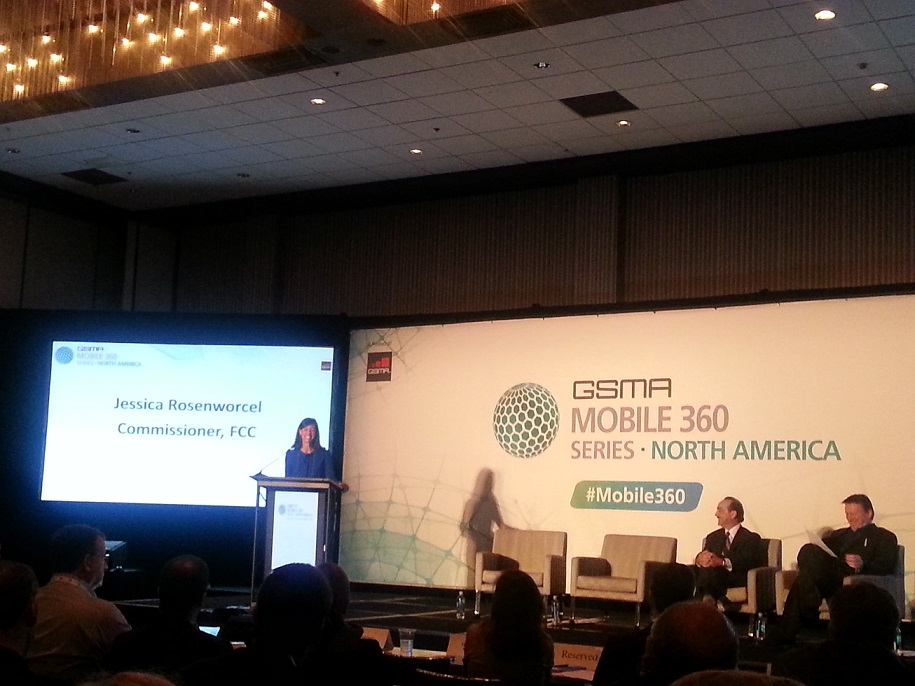 LIVE FROM GSMA MOBILE 360 NORTH AMERICA: Jessica Rosenworcel, Commissioner, FCC, used her time in the spotlight this morning to outline five ideas to drive future US market growth, with the issue of spectrum playing a major role.

Next up Rosenworcel turned attention to extending spectrum bands beyond the traditional 600MHz – 3 GHz frequencies usually used for mobile services. “We’re going to have to look high and low for spectrum for next-gen wireless networks. We can no longer limit ourselves to frequencies in the traditional range, we need to look elsewhere. On the low side we need to see if spectrum in the 400MHz range can be reused for mobile broadband. That’s not going to happen overnight. But we could develop a new swathe of airwaves primed for mobile broadband. And let’s bust through that 3GHz spectrum ceiling – let’s go all the way to 60 and 90GHz.”

The FCC commissioner also talked of improving spectral efficiency, while acknowledging the important role WiFi plays in the mobile industry. “It’s time to give unlicensed spectrum its due. Let’s leave behind the tired notion of facing a choice between unlicensed and licensed spectrum – good policy requires both.”

And Rosenworcel wants to strengthen the talent pool coming through the industry’s ranks. “Across government it’s time for a fresh infusion in engineering. We should create an honours programme for new engineers. The FCC could then be better prepared for tomorrow’s challenges.”

She described spectrum as the “biggest challenge” the mobile industry will face in the next five years, a view echoed by CTIA president Meredith Baker, who also appeared on the session.

Baker hailed the country’s AWS-3 and 600MHz auctions as “great first steps” but warned that more work needs to be done. “We will need to find hundreds more MHz of spectrum to keep our industry growing for subscribers. And we need a light-touch regulatory regime,” she added.