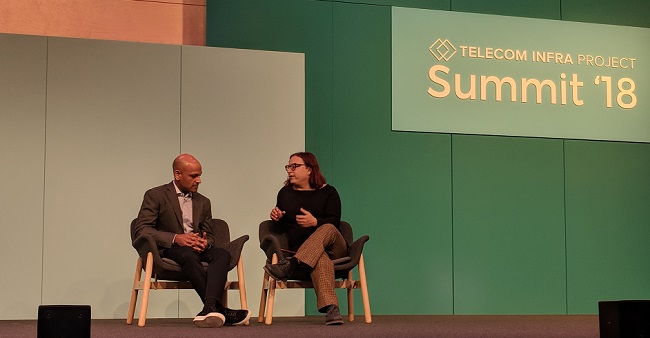 LIVE FROM TELECOM INFRA PROJECT SUMMIT 2018, LONDON: Facebook used its third annual Telecom Infra Project (TIP) event to showcase progress around its Terragraph initiative designed to improve connectivity in dense urban areas, while attempting to reassure operators it has no plans to become a direct competitor.

Jay Parikh (pictured, left), Head of Engineering and Infrastructure at the online giant, ruled out ever becoming a mobile operator. “We’re about partnering with the ecosystem, including the mobile network operators – not trying to be an operator,” he said.

“That’s not our core strength. There’s no interest in us being an operator – we want to help the operator community solve these challenges. We believe that people who are unconnected just aren’t getting better connectivity fast enough.”

Parikh is a key player in Facebook’s efforts to connect the half of the world’s population that remains offline (and TIP forms a major part of the company’s efforts in this area).

Terragraph
In 2016 the company unveiled Terragraph, operating in the 60GHz part of the radio system. The concept is to place nodes at 200-250 metre intervals around a city where the system can offer affordable coverage in non line-of-sight conditions. With large blocks of flats, the Terragraph system can be attached to the outside and linked to in-building Ethernet network.

Terragraph is based on WiGig, an enhancement to the Wi-Fi standard, which is designed to boost in-room bandwidth.

“Two years ago this was just in our campus being tested,” said Parikh, before noting that Facebook has now started trials in Hungary with Deutsche Telekom and its subsidiary Magyar Telekom; with YTL Communications in Malaysia; and with XL Axiata in Indonesia.

Parikh also announced the company will be conducting field trials with Claro and Vivo in Brazil.

Earlier this year a number of vendors made moves to back the initiative. Intel revealed it would support Terragraph chipsets. Radwin is developing Terragraph solutions, in partnership with Intel, and working with service providers to launch multiple trials.

Facebook claims its Hungary trial saw users experience an increase in speed to almost 1 Gb/s, and network availability was 99.5 percent or better. In Indonesia, the company said it demonstrated Terragraph’s ability to provide backhaul connectivity to Wi-Fi access points serving more than 1,000 people during the Asian Games.

“Our learning points to Terragraph’s viability as a commercial fixed wireless access and Wi-Fi backhaul solution, with fast deployment speeds and a total cost of ownership that is a fraction of that of an equivalent fiber build,” noted Aaron Bernstein, Director of Connectivity Ecosystem Programs at Facebook, in an earlier blog.

Rural efforts
Away from urban initiatives, at TIP Parikh talked up Facebook’s work with Telefonica to bring connectivity to more than 25,000 Peruvians in the Amazon jungle and the highlands of Peru, while also upgrading sites from 2G to 4G throughout rural Peru to bring improved connectivity to an additional 250,000 people.

Going forward Facebook plans to conduct trials of rural 3G and 4G deployments in a number of African countries including Nigeria and Zambia in partnership with MTN, and in Democratic Republic of Congo.

Facebook is clearly taking a broad approach to boosting global connectivity, with some of its previous initiatives already being shuttered. In June, for example, it announced it abandoned development of its Aquila project, comprised of internet-beaming drones for unconnected regions, in favour of working with aerospace companies on similar airborne connectivity solutions.

“We’ve learnt there’s no one solution to solve every connectivity problem in the world,” reflected Parikh. “We see a very wide range of problems. We’ve been trying things out across a broad spectrum … we do really try to make sure we’re investing across a number of ideas, even the ones that may seem a little crazy at first.”