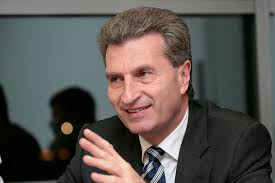 EU Commissioner Günther Oettinger said that Europe’s authorities have a crucial role in driving the continent’s 5G efforts, and that “without the 5G Public-Private Partnership, without the European Commission to moderate the process, and without the Horizon 2020 funding, Europe would not stand a chance to even be part of the game.”

He was speaking at a press conference at Mobile World Congress where the PPP –  including companies such as Alcatel-Lucent, Ericsson, Nokia and Orange – presented its vision for 5G, where he was quizzed on how this body will give European operators an advantage that they “lost in 4G”.

Earlier in the day in a Mobile World Congress keynote session, Oettinger mentioned that “being a 5G lead adopter requires to be a 4G leader, but Europe is still lagging behind on 4G deployments”.

The commissioner said that 5G infrastructure must support multiple vertical industries and promote “confidence in the future”, which is “the key for investments”. 5G technology, he said, will lower entry barriers for third party developers, as networks become more software-oriented.

He also stressed the importance of the digital single market, which “enhances economies of scale and scope”, with hope for a convincing decision by summer of this year.

“We must create pan European virtual infrastructures drawing on physical resources implemented in different Member States,” he said, adding that “our ambition is towards a global standard rather than a divided one, with European input.” This would “avoid a war on standards contrasting clearly with the situation at the start of the previous generations of communications systems.”

Oettinger also said that the issue of spectrum should be solved by the end of the decade, and spectrum should come under ministers in charge of digital, rather than finance.

Oettinger concluded that the PPP can count on the undivided support of the Commission to consolidate European leadership on this critical infrastructure for our economies and societies.