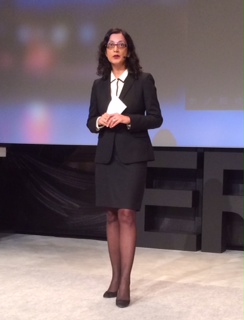 LIVE FROM ERICSSON BUSINESS INNOVATION FORUM 2014, STOCKHOLM: Ericsson highlighted the benefits of smart city technology and the importance of communication networks to support it — positioning the company, unsurprisingly, as a key player.

Ericsson chief strategist Rima Qureshi (pictured) said the vendor is keen to play a role in the development of connected services in cities: “If anything benefits from a connection, then we will enable it,” she noted.

The executive added that the infrastructure vendor is working with utilities and automotive players to develop services in this area.

She also noted the importance of a reliable network for some smart city services, particularly around health. “We need a very high performing network to enable things like remote surgery,” she said.

The company has identified “smart citizen concepts” that are of interest to consumers as part of a research project covering nine cities around the world.

The research found that 76 per cent of people would be interested in traffic volume maps, 70 per cent in daily energy usage comparison and 66 per cent in a water quality checking service.

Demand for different services will vary between different cities. For example there was an interest level of 92 per cent for a water quality checker in Delhi but just 41 per cent in Stockholm.

Bjorn explained that people seem prepared to use services enabled by the internet to solve city frustrations including traffic, communication with authorities and health.

“When we make smarter decisions, the cities we live in become smarter,” he said.

Providing smart city services won’t be without challenges though: 28 per cent of people surveyed said they felt city authorities might not consider their interests when using personal data, while 66 per cent said they want full control over the dissemination of their personal data.

Emphasising the importance of making cities function more efficiently, Maria Rankka, CEO of Stockholm Chamber of Commerce, noted the role of urban centres in fostering economic prosperity, due to their ability to “provide more intense and frequent social interaction”.

With Stockholm the fastest growing European capital, matched only by Oslo, Rankka said “urbanisation is key for countries to move up the prosperity ladder”. She added that digitalisation and globalisation “go hand-in-hand”.