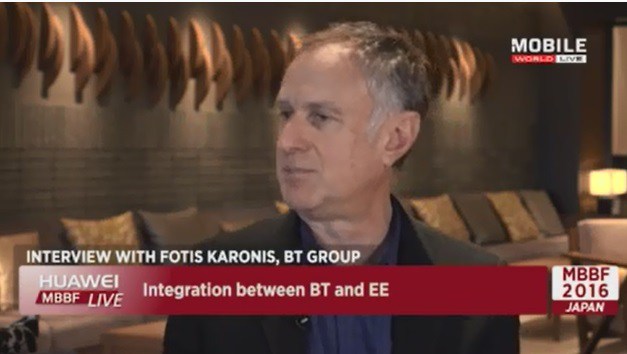 LIVE FROM HUAWEI MOBILE BROADBAND FORUM 2016, TOKYO: Fotis Karonis, CTO of mobile operator EE, as well as managing director of IT and Mobile at parent BT Group, sees the UK market leader potentially making LTE-Broadcast (LTE-B) available in 2018, according to an interview with Mobile World Live.

EE has been very proactive in backing the technology and is one of the few around the world to have tested it.

Karonis described the technology as “amazing” and added: “I don’t see this coming this year or the next but I would see commercial opportunities bundled in our offers around 2018.”

The backing of a major operator such as EE could perk up wider interest in LTE-Broadcast, which is pitched as providing coverage in congested areas, particularly sports stadia. Karonis also sees the technology as having potential in the emergency services market.

The operator is a co-founder of the LTE Broadcast Alliance, set up in April,  with Telstra and Korea Telecom. In September it named HKT, CSL Mobile, Reliance Jio, Smartfren, TIM and Turkcell as new operator partners.

However, there is a perception that after an initial bout of enthusiasm for the technology through various pilots and trials, momentum around LTE-B has waned somewhat, which could have led to the formation of the alliance.