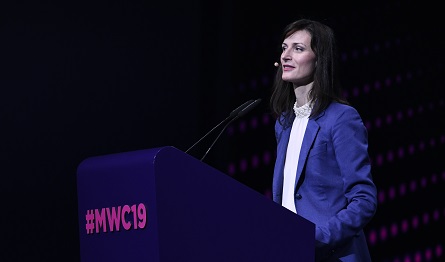 European Commissioner for digital economy and society Mariya Gabriel sought to diffuse what she described as mobile industry unrest on the 5G network security issue, stating her organisation was working to bring a solution to the table very soon.

Speaking in the second keynote on Monday, Gabriel acknowledged concerns raised by the mobile industry on potential legislation related national security and 5G rollout, an apparent reference to the ongoing row about the role of Huawei in Europe.

“I’m well aware of the unrest among all of you key actors in the telecommunications sector caused by the ongoing discussions on the cybersecurity of 5G,” Gabriel said. “Let me reassure you the Commission takes your view very seriously, because you need to run these systems every day.”

She continued: “Nobody is helped by premature decisions based on partial analysis of the facts. However, it is also clear that Europe has to have a common approach to this challenge and we need to bring it to the table soon otherwise there is a risk fragmentation raises because of divergent decisions taken by neighbouring states trying to protect access.”

“We are working on this important matter with priority and the commission will take steps soon.”

AI ethics
Outside of the security debate, Gabriel praised the status of 5G development and rollout across the European Union, adding the Commission aimed to be at the forefront of AI development.

Gabriel said it aimed to achieve €20 million in AI-related investment across private and public sector by 2020.

The commission has already set up a working group of sector experts, including operator representatives, to assess the ethical implications of the new technology.

The European Commission isn’t the only organisation looking into the ethical use of AI. Later in the session, Organisation for Economic Co-operation and Development secretary general Angel Gurria warned AI policy needed to be defined focused on the human impact, with so many jobs likely to be impacted directly by the advent of technologies based on AI.

“We aim to set guidelines to help policy makers around the world create a predictable yet stable policy environment for trustworthy AI,” he said, noting the fact there were several organisations working on the area which would lead to greater pool of expertise being lent to the issue as they would all collaborate.