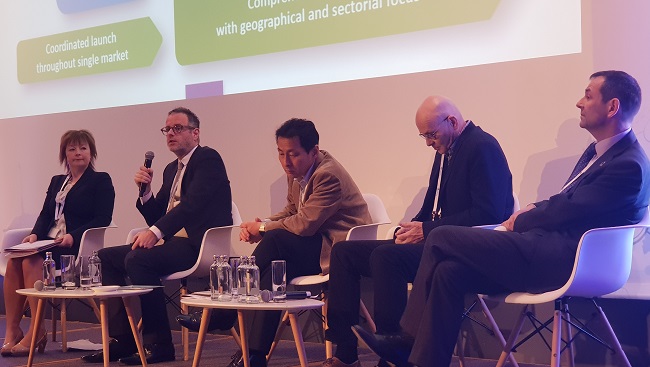 LIVE FROM THE EUROPEAN 5G CONFERENCE, BRUSSELS: Europe was hailed as leading the world in 5G trials by European Commission (EC) representative Peter Stuckmann due to the wide variety of projects underway, though his fellow panellists noted significant work remained.

During a session assessing the state of 5G development in the European Union (EU), Stuckmann, EC head of unit for future connectivity systems (pictured, second from left) said the targets put forward by the Commission were on track in the majority of member states.

Its figures show 138 trials are currently underway across 28 countries.

“The trials are where Europe is leading at the moment because of the diverse activities we have, developing ecosystems,” he noted adding projects were underway in media, transport and energy sectors.

In addition, 35 “5G cities” have been identified across 14 countries, those set to receive 5G coverage by 2020. As part of a long-standing strategy, the EC aims to have at least one urban area offering 5G services in each member state during 2020 ahead of more stringent targets for 2025.

GSMA head of policy Andy Hudson (pictured, far right) agreed Europe was “doing well”, but noted rollout was even quicker in the US and parts of Asia. He added it was important to keep focus as Europe “risked being left behind”.

Spectrum
Lasse Wieweg, chairman of the spectrum group at the GSA (pictured, second from right), stated regulators on the continent needed to open a greater number of frequency bands for 5G services to enable the new technology to meet the potential outlined for it.

He noted the availability of high, medium and low frequencies is “critical” to its future; statements also echoed by Hudson.

Hudson noted GSMA forecasts show the US and Japan are the two markets likely to have the greatest proportion of mobile handset connections of 5G, with both expected to have 49 per cent using the technology by 2025.

Meanwhile, speaking through a recorded segment due to issues with US regulators speaking at live events, FCC commissioner Brendan Carr highlighted the importance of enabling policies for 5G, including considering policies which may be hampering the pace of rollout in the US.