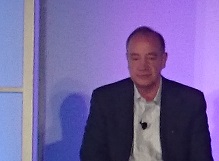 “Picking the right ecosystem partner is critically important in winning in today’s market place. In fact, for us it’s a wonderful differentiator against those consultants that still maintain that independence, that agnostic view. They don’t have a strong opinion, they don’t have strong partnerships, and we can come in and differentiate with a value proposition that is solution-oriented as opposed to “kit and gear” oriented,” Sell (pictured) said.

Accenture formed a partnership with Alcatel-Lucent designed to combine the former’s systems integration and transformation services with the latter’s IP networking products and services.

An early customer for the partners is Vodafone Italy, which worked with Accenture and Alcatel-Lucent to deploy a remote management platform that automates broadband services activation, troubleshooting and problem resolution.

“The client probably gets the most credit for pushing us together,” Sell said. “Without us really selling much, the client identified where we have these strengths, and that it was complementary to put us together.”

“I think that model helped build momentum. So we look at that as a joint success story. And whether we shared the particulars with everyone in the account team is not important, we point to the joint success around a very important client for both of us. And that has a way of building momentum,” he continued.