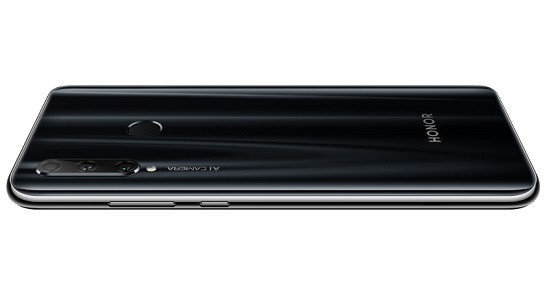 Honor took the wraps off the first device in its Honor 20 series of smartphones, Honor 20 Lite, with the entry level to the line offering solid technology at a competitive price point.

The headline feature of the device is the triple-lens camera. It marries a 24MP main with 8MP wide angle and 2MP lenses for hardware-level bokeh effects, and as is the new norm includes AI-enhanced features including portrait segmentation and scene recognition.

The smartphone offers a 6.2-inch screen with “minimalist dewdrop notch” and screen-to-body ratio of more than 90 per cent.

Honor 20 Lite is powered by a Kirin 710 processor (not Huawei’s top-tier silicon) with Honor’s GPU Turbo technology, which optimises performance for certain games. It has 4GB of RAM and 128GB of storage, with microSD expansion.

At launch, Honor 20 Lite will be priced at £249 in the UK through a number of retailers. This will put it in competition with devices including Oppo’s RX17 Neo, Motorola G7 Plus and Xiaomi’s Redmi Note 6 Pro.

Series speculation
Honor has an event scheduled for 21 May 2019 when it will unveil more devices in the Honor 20 line, likely to be the mainstream Honor 20 and a higher-spec Honor 20 Pro. This will give the vendor a three-version line ranging from affordable to premium.

Certainly the Pro device is expected to have a camera set-up similar to parent Huawei’s recently-announced P30 Pro: this includes a high-resolution main camera with secondary wide angle and telephoto lenses, as well as 3D Time of Flight (ToF) sensor.

The standard Honor 20 will include triple cameras, omitting 3D ToF.

Honor has been particularly keen to point out the potential of 3D ToF, also used in its View 20 smartphone, as an enabler for motion gaming.

It has been mooted Honor 20 Pro will feature a 6.5-inch screen, while Honor 20 has been pegged at 6.1-inches. It is also likely to feature a punch-hole front camera, similar to that of View 20, as an alternative to the notch.

Honor 20 and Honor 20 Pro are expected to be powered by Huawei’s latest high-end processor, Kirin 980, which is used in View 20 as well as Huawei’s P30 and Mate 20 lines.

Both 6GB or 8GB of RAM and 128GB or 256GB of storage have been tipped and it is certainly possible multiple versions will be available using a mix of these.