Amazon Appstore is beginning to challenge Google Play as a destination for Android app users, according to analytics firm Distimo, with particular progress having been made in paid downloads.

Amazon Appstore offers apps for Android devices and was launched in the US two years ago before the UK, France, Germany, Italy, Japan and Spain followed at the end of 2012.

Amazon now plans to expand Appstore to nearly 200 countries in the coming months, with Australia, Brazil, Canada, Mexico, India, South Africa and South Korea among those being added.

The top 200 paid apps in Appstore were downloaded 1.6 million times and earned $3 million in one-off fees in March.

When looking at the top 1000 paid apps, Google Play recorded roughly twice as many downloads.

However, some paid apps actually performed better on Amazon Appstore than Google Play. Monkey Preschool Lunchbox, developed by THUP Games, was downloaded 5,700 times from Appstore and  5,000 times in Google Play.

There was still considerable variation in download numbers though, with Disney’s Temple Run: Oz —  ranked fifth for the month in Appstore — recording 42,000 device installs from Appstore compared to 140,000 for Google Play. 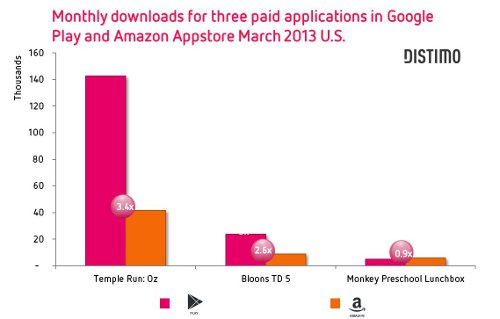 The gap in revenue between the stores for paid apps was slightly smaller with the top 200 paid apps in Google Play generating $5.2 million in March, around 1.7 times the figure for Appstore.

And again, some apps performed better in Appstore than Google Play. In the US, Survivalcraft by Candy Rufus Games earned almost three times as much one-off revenue in Appstore ($130,879) as it did in Google Play ($48,418).

Free apps coming from further back

Distimo found that the top 200 free apps on the Appstore were downloaded 16 million times in March. There were 10 times as many US downloads for Google Play during the period.

The number of downloads between the games on the different platforms varies greatly.

Halfbrick Studios’ Fruit Ninja was downloaded 9.1 times more in Google Play than Amazon Appstore in March, with 2.3 million downloads compared to 250,000 downloads in the Appstore.

However Jetpack Joyride (also from Halfbrick Studios) saw just 3.8 times the number of downloads from Google Play when compared to the Amazon store, at 818,000 and 216,000 respectively. 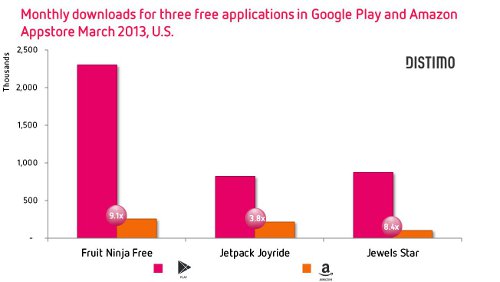 In terms of publishers, Rovio Entertainment led the way in Amazon Appstore for free apps, with its title “The Croods” being most popular of all in March.