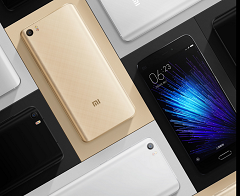 Chinese smartphone player Xiaomi this morning unveiled its latest flagship smartphones, the Mi5 and Mi5 Pro, as it attempts to turnaround its fortunes after missing its handset target last year.

The once fast-rising firm missed its 2015 handset target of 80 million by 12 per cent and also reportedly failed to reach its $1 billion target for revenue from internet services.

The flagship models – which will be early users of Qualcomm’s Snapdragon 820 – are targeted at both the domestic Chinese market, which has been slowing, as well as international markets – although India was the only one name-checked.

Xiaomi VP Hugo Barra said the new Snapdragon chipset makes the devices “insanely fast”. The 820 reportedly is twice as fast as the Snapdragon 810 and offers “double the performance with half the power consumption”.

The Mi5 Pro comes with a 3D ceramic body that Barra claims is extremely durable and wear-resistant, but is not common in devices because it is 75 per cent more expensive than 3D glass (which is used for the Mi5).

Barra also said the company achieved a “technical breakthrough” with the rear camera, featuring four-axis optical image stabilisation (the iPhone has two), which reduces blur when the phone is moved while taking photos.

The rear camera has a 16MP sensor and a sapphire glass lens. The front camera is 4MP, the same as the Mi Note. It also comes with Qualcomm’s Quick Charge 3.0, which is said to be 20 per cent faster than the previous generation.

Ian Fogg, head of mobile at IHS Technology, said the Mi5 has “innovative design elements and the very latest hardware technology”, but Xiaomi needs to do more with its software ecosystem to significantly grow its business beyond its home market of China.

“Until Xiaomi tackles the fundamental international issues with its portfolio, its shipment growth will continue to be low,” he said.

With its new “subdued design”, this is the first time a Xiaomi device comes with a home button. It also has a fingerprint sensor. The Mi5 ($262) and the Mi5 Pro ($354) will be available in China from 1 March and will come to India and other markets soon.