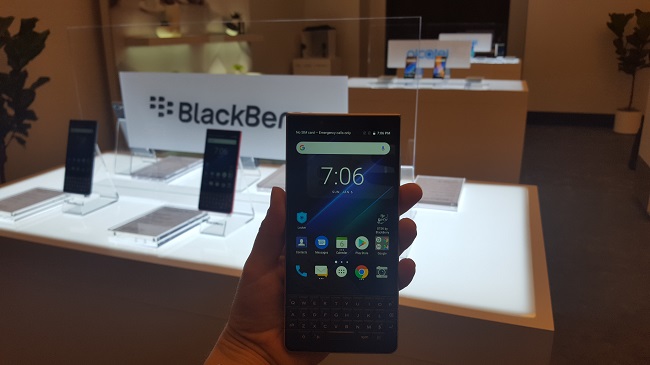 LIVE FROM CES 2019, LAS VEGAS: TCL Communication scored a major deal to bring BlackBerry-branded handsets to Verizon, a move executives said provides a shot in the arm for the brand’s comeback effort.

The deal covers the BlackBerry Key2 LE, which will be made available to Verizon’s business customers in the coming weeks. Francois Mahieu, BlackBerry CCO, told Mobile World Live (MWL) the addition of Verizon as an operator partner is an important step in re-establishing BlackBerry as a leading brand for business users.

“If I look at the very large enterprise customers that we’ve been working with, their number one ask has been for the phone to be available on AT&T and Verizon. So we went where the demand was,” he said, adding TCL Communication is also in talks to bring the higher-end Key2 to AT&T.

AT&T and Sprint both signed on as partners to the KeyOne following its release in 2017. But until now, no US operator had been named as a distributor for the company’s second generation Key2 and Key2 LE devices, launched in 2018.

“I can imagine a lot of usage for which you will enjoy using your BlackBerry for video conferencing your colleagues around the table or benefitting from low-latency applications. But will we be a first mover on this? Probably not.”

However, executives revealed TCL Communication is working to bring flexible display technology to its mobile devices, joining dominant rivals Samsung and Huawei in a shift they said will usher in a new era of innovation.

Stefan Streit, GM of global marketing, told MWL the company is currently testing a number of different form factors, with the aim of bringing a concept device to MWC Barcelona next month.

It is unclear which of TCL Communication’s brands might be the first to debut a flexible screen (in addition to BlackBerry, the company also holds licences covering the use of Alcatel and Palm brands). However, Streit hinted Alcatel, with its entry-level focus, would be an unlikely choice, adding “it could even be a new brand entirely”.

Alcatel 1X will be available in select markets across North America, Europe, Asia, the Middle East and Africa in Q1 for less than $120. The Alcatel 1C will make its debut in markets in Asia, Latin America, the Middle East, Africa, and Europe sometime this year priced at less than €70.